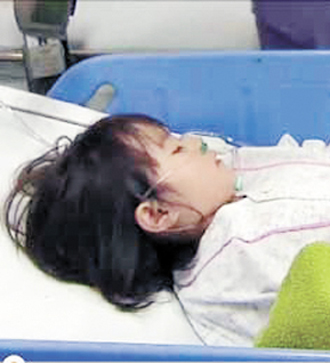 Kwon Ji-yeon, 5, is treated Wednesday at Mokpo Hankook Hospital in South Jeolla. She was traveling with her parents and older brother on the ferry.[Screen capture from SBS]

Among the survivors of the tragic ferry accident were a 5-year-old girl and an 8-year-old boy, both from different families, whose other relatives remain missing.

On Wednesday, Kwon Ji-yeon, 5, was taken to Mokpo Hankook Hospital, in Mokpo, South Jeolla, along with the other survivors. She was traveling with her parents and older brother to Jeju Island to look for a new house.

“Somebody shouted at me from the back to take the baby,” said Yu Ho-sil, one of the survivors who helped in Kwon’s rescue, “and other students passed the baby outside.”

The little girl knew the names of her family members, but could not remember her address. She reportedly told the medical staff that her mother and brother handed her a life jacket and passed her up to the rescue boats.

The hospital offered to assist authorities and rescue personnel in finding her other relatives, and the girl’s photo and name immediately went viral online on Wednesday.

Kwon’s aunt and grandmother recognized her from a web post and came to the hospital, though her parents and older brother are still missing.

Medical staff assessed that Kwon was in a state of shock from the accident and the unfamiliar environment, and put her in a separate room to help her calm down.

“The child did not suffer any severe external injuries,” said Ryu Jae-kwang, the hospital’s director. “To help stabilize her condition, we are limiting her contact with other people.”

The other survivor, 8-year-old Jo Yo-sep, was separated from his family in the accident. When the ferry began to list, the boy was trying to locate his family on deck. He fell on the floor when the boat tilted, but was picked up by 55-year-old Kim Byung-kyu, who grabbed him and kept him safe until the rescue boats arrived.

Kim was moving to Jeju Island with his wife after having shut down his business in Incheon, and was on deck with his wife at the time of the accident.

As the ship rapidly began to list, Kim held onto the rail of the deck with one hand, while holding Jo and his wife in the other. Kim asked nearby students to pass over a life jacket and put it on the child. He later found jackets for his wife and himself.

All three were saved later that day by rescue boats. Jo was taken to a local gymnasium in Jindo County, where other survivors and families are awaiting news. As of press time, the boy’s parents were still missing.

The 6,825-ton Sewol was carrying 475 people, mostly high school students on a four-day school trip to Jeju Island, and sank Wednesday off Korea’s southwestern coast, killing at least 10 people. Kwon’s parents and older brother and Jo’s family are among the 286 people still missing.