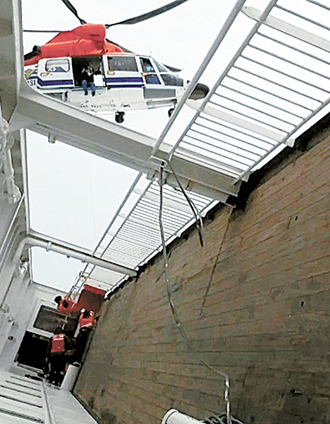 Video footage taken by one of the survivors shows some of the events of the disaster. Provided by Kim Hong-kyung

Photographs and video footage taken by survivors from the capsized Sewol ferry surfaced online yesterday, providing a glimpse of the fear and terror among passengers on the 6,825-ton vessel before it started to fill with water off Korea’s southwestern coast.

A video taken following the accident was uploaded to YouTube, which showed a handful of students kneeling down beside a bed. Several screamed as the boat began to rapidly list and water seeped in under the floor.

The footage was recorded on one of the survivors’ mobile phones, which broke during the chaos. Many of the passengers aboard the ship were students from Danwon High School in Ansan, Gyeonggi, who were on a class trip to the resort island of Jeju.

A photograph obtained by Yonhap News Agency from one of the survivors showed a group of adults in life jackets desperately struggling to maintain their balance on the ship, which was tilted nearly 90 degrees. The ferry was so upturned that they were all photographed in a completely upright position. One man among them was shown hanging from the ferry’s handrail.

Details from interviews with those rescued also started trickling in online and on television, giving the public a much clearer picture of the tragic events that played out on Wednesday as passengers battled fierce winds and cold, choppy water seeping into the boat. Some of the accounts reinforced the claim that the crew’s order to “stand still” had exacerbated the situation.

“I thought I was almost dying. Seawater forced its way into where we were,” said Lee Da-in, one of the student survivors who was interviewed by MBC, a broadcasting company. “Inside we felt the tremors and everything crashing down, but what I heard from crew was to stay put.”

She added that no one informed the passengers where the emergency exits were and that she was able to survive because she found an exit near the stairs.

Another MBC interview also provides clues as to just how quickly the boat began to list. “It was a matter of minutes that the ship leaned about 60 degrees,” said Kang In-hwan. “That’s when people were leaned to one side along with their luggage. Then it made the ship tilt further, almost 90 degrees.”