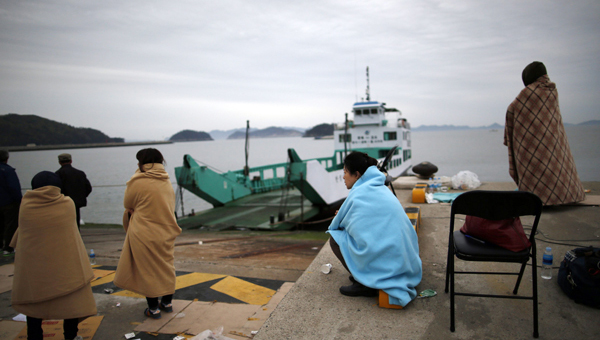 Family members of missing passengers who were on the South Korean ferry Sewol that capsized in the sea wait for the restarting of search and rescue operations yesterday at a port in Jindo County, South Jeolla. [REUTERS/NEWS1]

Frantic efforts continued yesterday to find and save hundreds of people missing after the ferry Sewol capsized in waters off the southwestern coast Wednesday morning, involving a small army of rescue workers and ships, planes and helicopters.

But they were hampered by low visibility and gushing wind and rain, and no survivor was found yesterday. As of 8:00 p.m. yesterday evening, 286 people remained missing, most of them high school students, and only 179 passengers had been rescued.

The remains of four fatalities were found yesterday, however, bringing the total death toll to 10 out of the 475 people who boarded the ferry Tuesday night in Incheon to travel to Jeju Island.

One of the fatalities discovered yesterday was confirmed as a 17-year-old student from Danwon High School in Ansan, Gyeonggi. That brings the number of killed students to four and the number of missing students is 245.

Two of the 10 total casualties were teachers from the same school, and two were members of the ferry’s 29-person crew. Seven of the crew are still missing, although 20 including Captain Lee Jun-seok allegedly abandoned the ship without even advising passengers to flee.

In what is likely to be the country’s worst maritime disaster in decades, the government deployed a total of 555 divers from the military and Coast Guard, along with 29 aircraft to assist in the rescue effort. The Navy and Coast Guard mobilized 169 vessels to surround the tiny tip of the ferry sticking out of the frigid water.

Family members of the dead and the missing descended on Jindo County, South Jeolla, near the site of the sinking.

The biggest contingent of passengers on the doomed ferry was a group of 325 high school students on a four-day school trip to Jeju Island.

“From midnight to dawn [Thursday], there were five attempts [to get inside the ship],” said Security and Public Administration Minister Kang Byung-kyu during a press briefing yesterday. “But strong currents and low visibility became tremendous obstacles to underwater searches. Nevertheless, we will do our best.”

Waves of up to three meters (9.8 feet) hampered the rescue work, along with winds of 12 meters per second. Three divers doing search work got lost for about five minutes at noon, raising fears that currents had swept them away. They were saved by a fishing boat taking part in the operation.

The diving operation came to a halt, however, at 2:00 p.m. yesterday due to the bad weather, deepening the suspense of the missing passengers’ family members.

Families who gathered at an indoor gym in Jindo County went on an emotional roller-coaster ride throughout the day yesterday. The families, numbering nearly 600, cheered when they were told that students trapped inside the capsized ship sent text messages late Wednesday and begged for the search mission to be sped up.

For the families, the messages gave a measure of hope they desperately needed. But the genuineness of the messages was not confirmed. It was also possible that the transmission of the messages had been delayed by hours and that they could originally have been sent Wednesday morning.

“My name is Choi Hye-rin and I am still alive,” read a text from one alleged victim. “I am inside the kitchen and a lot of kids are still alive here. Please help us here. .?.?. There are about 14 of us staying together here.”

The authorities are investigating the text to find out when and from where it was sent.

The upbeat emotions crashed when authorities announced they were suspending search operations due to the bad weather.

At around 11:30 a.m. yesterday, the mother of student Park Young-in was told he was one of the students who died. She collapsed and was taken to a nearby hospital. It turned out her son had been confused with another student who died and is unaccounted for.

At Danwon High School in Gyeonggi, relatives of students gathered at a gym anxiously, awaiting any word. A totally unconfirmed rumor that students were still alive inside the ship swept among the desperate families.

“She’s alive? She is on the list of survivors? Thank God, thank God!” cried Kim Ok-yeong, the 74-year old grandmother of one missing student.

“I had a phone call from my son and he said it’s certain she is alive,” Kim said. Her attitude shifted swiftly to anger on the subject of the captain and crew that left her granddaughter and the other students behind.

“I will curse them until my death,” she vowed.

The government yesterday came under heavy fire for releasing inconsistent numbers of rescued and missing passengers.

At a press conference yesterday, Security Minister Kang confirmed that there were actually 475 people on board the ferry, not the 462 previously announced, and the 459 announced Wednesday.

“We confirmed that 13 truck drivers got on board without purchasing tickets,” Kang said. “So there were officially 475 passengers on the ferry.”

Three salvage cranes were on their way to the site to try to hoist the ship up. It is anticipated that the lifting operation could begin this evening at the earliest. Raising the ship could take well over a month given that it took more than 30 days to lift the 1,300-ton Cheonan warship sunk in March 2010. The Cheonan weighed five times less than the Sewol.