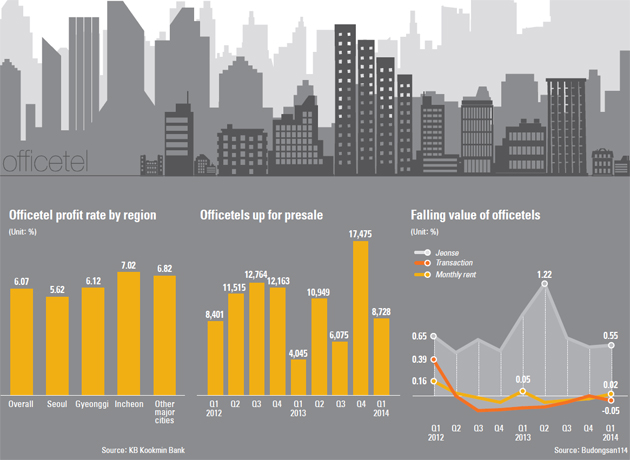 Single-room officetels, which have provided a lucrative yet steady income for homeowners in a sluggish real estate market since the global crisis, are losing their appeal, a study by KB Kookmin Bank showed.

Income from renting out single-room officetels has dropped slightly compared to the same period last year.

According to a recent study by the bank’s real estate department, the average profit rate of 265,908 officetels at 1,147 complexes last month was 6.07 percent. This is a 0.04 percentage point drop from the same period last year.

The profit rate is the total earnings from leasing the single-room space compared to the total investments that were made. However, the rate does not include various taxes and costs in maintaining the real estate.

“There’s an oversupply of similar housing with monthly rent and many owners of small size apartments have been switching from jeonse to monthly rent,” said a KB spokesman in explaining the falling profit rate.

Seoul posted the lowest profit rate at 5.62 percent. This is 0.03 percentage point lower than a year ago. Gyeonggi trailed behind with 6.12 percent while Incheon’s officetel profit rate was 7.02 percent. The average profit rates of other major cities including Busan and Gwangju was 6.82 percent.

The average value of a single-room officetel in Seoul was 219.7 million won ($211.5 million), which is still higher than other regions, including Gyeonggi (171 million won) and Incheon (175.6 million won).

In Gyeonggi, Siheung had the highest profit rate with 7.51 percent followed by Ansan and Uiwang, which both scored 7.17 percent. The lowest rate in Gyeonggi was Seongnam with 5.35 percent.

In Incheon, Jung District was the most profitable with an 8.14 percent profit rate. In other major cities, Seo District in Gwangju had the highest with 8.17 percent while Haeundae District, the popular beach neighborhood in Busan, posted the lowest rate with 5.65 percent.

The KB report projected that the officetel market will further shrink due to a plan announced by the government earlier this year to tax monthly rent incomes.

According to Budongsan 114, a real estate consultant, in the first quarters of the year, 8,728 officetels were up for presale - twice the number up for presale a year ago. But compared to the fourth quarter last year, the number for pre-sale had shrunk significantly.

In the Seoul metropolitan area, 5,631 officetels were on pre-sale, nearly 3,000 units less than the previous quarter. Most pre-sales made nationwide were in Seoul (2,100 units), followed by Gyeonggi with 799 and Incheon with 66.

The value of officetels has been falling as profit from monthly leases shrinks. In the first three months, transaction value has fallen 0.05 percent compared to a year ago.

“In the fourth quarter there was a huge surge in people leasing new officetel and an oversupply of similar small housing,” said Kim Hyun-jin, an analyst at Budongsan 114. “We believe the government’s announcement that it will slap a tax on income made on rent led to a failure to attract new investors that affected the officetel market.”

While the heat is cooling in the officetel market, some units are still in demand. Officetels in Magok District in Gangseo District, southwestern Seoul, are gaining attention thanks to conglomerates such as LG and Kolon, who are planning to set up research and development centers in the neighborhood.