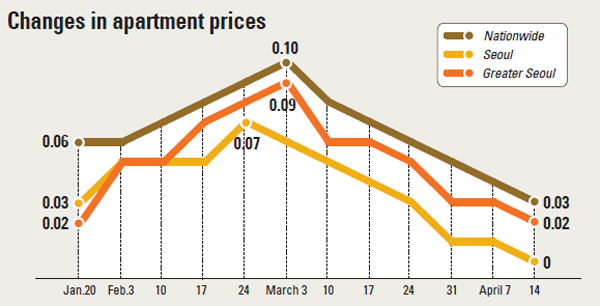 In a joint study by Joinsland, the real estate unit of the JoongAng Ilbo and KB Kookmin Bank, apartment prices nationwide inched up 0.03 percent from the previous week. Apartment values have risen for 30 consecutive weeks. Last week, prices increased an average of 0.4 percent.

By region, Seoul apartment prices barely moved. When breaking down both Gangbuk District, northern Seoul, and Seodaemun District, central Seoul, the average price rose 0.02 percent from a week earlier. Gangbuk, in particular, rose due to a lack of jeonse, or long-term rent, for a minimum of two years, as home seekers become homebuyers. The region saw its apartment value rise for the second consecutive week.

The value of popular Gangnam apartments retreated 0.01 percent from a week earlier after the government announcement a tax on monthly rent income and as the spring moving season winds down.

In Korea, many people typically relocate in spring and fall before school starts. Values in Songpa District, southeastern Seoul, fell 0.01 percent after the Supreme Court on Monday rejected a redevelopment project for the Garak Si-young apartment complex.

The redevelopment project for 6,600 apartments has been on hold for more than 10 years. Several homeowners opposed the redevelopment, saying the financial burden and other contracts had been changed from the initial proposal.

A lower court ruled in favor of the committee in charge of the redevelopment. After the court ruling, the number of homeowners who put up their apartments for immediate sale rose, which helped lower the average value of apartments in the neighborhood by 0.01 percent from a week earlier.

Industry experts say the recent deceleration in the growth of apartment prices was largely because investors who were considering buying property to rent out have gotten cold feet since the government announced it would slap income taxes on rents in late February.

The government’s target is to tax owners of multiple rental home who make a huge living from rental income, while easing the financial burden on tenants by returning a certain amount of their rent payments in the year-end tax settlement.

In a follow-up a week after the initial announcement, the government said it would start implementing the income taxation in 2016 and that any income made from rent before then will be exempted.

“People who were considering buying apartments to rent are holding back until June, when it will be clear whether the government’s taxation bill will pass the National Assembly,” said a realtor.

The situation isn’t limited to Seoul. The greater Seoul area this week continued to grow for the 17th consecutive week. But like the capital itself, its growth has decelerated from the previous week.

Paldal in Suwon saw its apartment values rise largely thanks to growing demand from newlyweds, and due to the spike in jeonse price, many people who had been looking to buy finally decided to purchase.