White and green fields ring in spring in Gochang, Buan

White and green fields ring in spring in Gochang, Buan 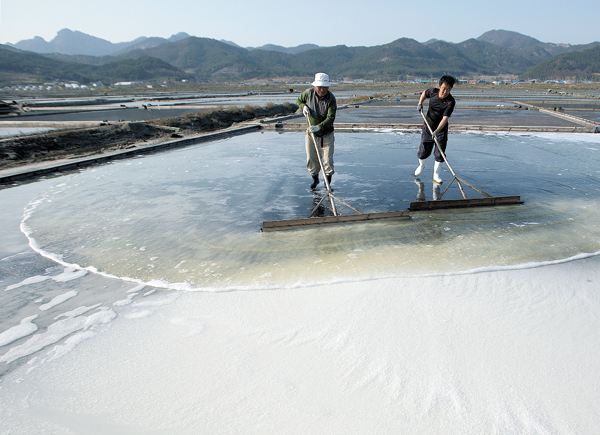 Yellow, pale pink and white are considered typical spring colors because the season always comes with fresh flowers. But in the southern part of Korea, spring also comes with coarse sea salt and spiky yellow-green barley.

If you haven’t had enough of spring yet, head down to Buan and Gochang counties, North Jeolla, where spring is at its peak.

In springtime in Buan, the fields turn milky white as sea salt production picks up along with the seasonal sun and wind. Although assorted spring flowers are in full bloom in Buan, local residents get spring fever from sea salt and abundant seafood.

Buckets of webfoot octopi, crab and cuttlefish, which are all in season now, were stacked here and there at Buan Sangseol Market, the biggest permanent traditional market in the region.

The smell of boiling webfoot octopus shabu shabu wafted through some of the narrow alleys at the market, where numerous sushi restaurants are nestled.

In order to fully experience spring in Buan, this reporter left the market and headed to Gomso Salt Field in Gomso-ri, Jinseo-myeon, the home of high-quality sea salt.

Since salt from Gomso has less sodium than other types of sea salt and even has a slightly sweet taste, the price is two or three times higher than normal.

Behind the quality salt are seasoned salt farmers who start their day before the sun comes up.

The oldest and most experienced of these farmers is Heo Jung-jang, 71.

“Lazy ones can’t get salt,” said Heo, who at the salt field goes by the nickname “the boss.” “You have to rake in the salt before the sun rises. Otherwise, you are going to miss another batch of salt.” 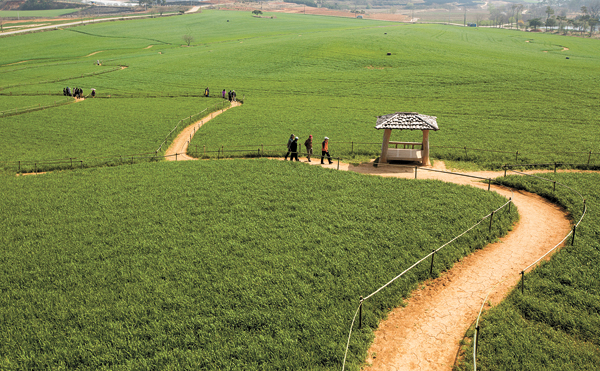 The signature spring color of Gochang, North Jeolla, is green as barley springs up from the red soil. Thousands of people visit Hakwon Farm each year in April and May to see the barley. By Ahn Sung-sik

These farmers share profits with their companies at a rate of 5:5, thus each individual farmer is an artisan and businessman. They care a lot about the quality of their products.

In order to get the best sea salt, which contains between 25 percent and 29 percent of salinity, they always keep an eye on the local weather and also watch forecasts for neighboring countries.

“We’re quite high-tech,” said Heo. “We’ve been watching the weather forecasts of Japan for a long time now.”

The sea salt production season usually begins in March and ends in October.

After a long, harsh winter farmers recognize the sign of spring as the sign of salt, when it becomes warm and windy enough to evaporate seawater.

To produce the salt, all it takes is sun, wind and saltwater. It usually takes 20 days to make a batch of sea salt, which is harvested in May and June.

But if it rains, everything goes down the drain, which is why the farmers are obsessed with their weather forecasts.

The farmers called it a day just before the sun went down and the vast salt farms and humble salt storages were tinged with crimson.

About an hour’s drive from Buan, you can visit Gochang to see the beautiful contrast made by green barley sprouting up from the red soil of Gochang.

Each individual barley is nothing more than a grass blade, but together they make a scene as they sway in the breeze.

Barley at Hakwon Farm in Seondong-ri, Gongeum-myeon, is grown across 500,000 square meters (123 acres) of open field. The farm is one of the most iconic agricultural destinations in Korea.

After photos of the barley farm were made popular by the media in the late 1990s, the farm has become a top destination for travelers. 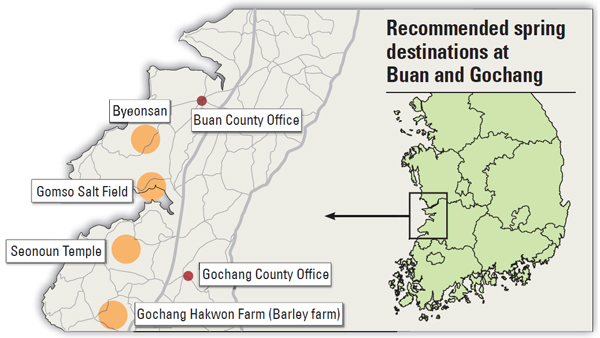 Because neighboring farms also raise barley, the nearly one million total square meters of barley fields appear to be endless.

Hakwon Farm was established by Chin Iee-chong, the late prime minister who took office between 1983 and 1985, and now the farm is run by his son Young-ho, 66, who created the Gochang Barley Festival.

The annual gathering, which is in its 11th year, attracts thousands of visitors every year.

The tranquil scenery of the farm has been captured in many films, too. Hit films such as “A Werewolf Boy” (2012) and “Welcome to Dongmakgol” (2005) featured Hakwon Farm as one of the central locations.

When fully grown, barley will usually be taller than an adult’s knees, but earlier this month the crops had not yet grown knee-high.

Looking down at the barley from a resting place at the highest part of the farm is therapeutic, but the crop is best enjoyed by a walk through the fields.

Visitors can wander for as long as they want through the narrow paths between the barley.

“Couples used to sneak into barley fields for dates in the old days, but they can’t do it anymore,” said Chin with a laugh.

Deep red camellia flowers are another signature of spring in Gochang.

Under the flowers’ enchantment, many poets such as Seo Jeong-ju (1915-2000) and Kim Yong-taek wrote about their beauty.

At the backyard of Seonoun Temple, 3,000 camellia trees are planted, but a fence stops people from entering the garden because some trees are designated as natural monuments.

But the camellia flowers are still worth seeing from the back of the temple. 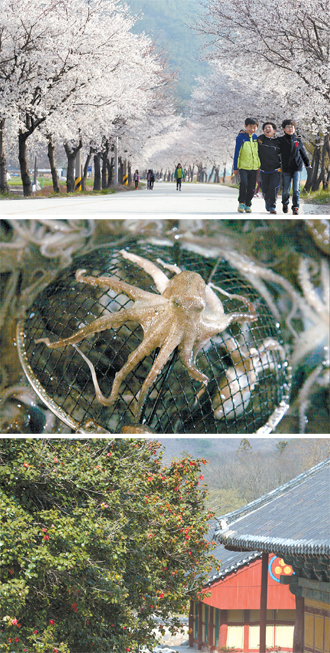 From top: Cherry blossoms on Byeonsan, Buan County; a webfoot octopus, which is in season now at Buan Sangseol Market; and camellia trees at Seonoun Temple, Gochang County.

Seonoun Temple is probably the last place where the flowers can be seen this year.

Most camellias begin blooming in early March but camellias at Seonoun come into full bloom in April. The temple says visitors can come see the flowers until the end of this month.

It takes about three and a half hours by car from City Hall, central Seoul, to reach Gomso, Buan County, North Jeolla. From Gomso Salt Field it takes an hour to get to Gochang Hakwon Farm. A free tour is available upon reservation for those who want to take a closer look at the salt farm. An experienced salt farmer will show you every nook and cranny of the salt field.

Mid-May is a good time to visit the farm because you can see how yellow salt is made. Yellow sea salt, often considered the best salt, is coated with pine pollen that floats in from Byeonsan. The special salt is known to improve blood circulation and reduce signs of aging.

The 11th Gochang Barley Festival begins today and runs through May 11. You can try barley-based foods such as barley rice topped with barley sprouts for 7,000 won ($6.70).There will also be traditional games to play during the festival.

Admission to the festival is free but special events are not. For more information about the festival, call (063) 562-9897.