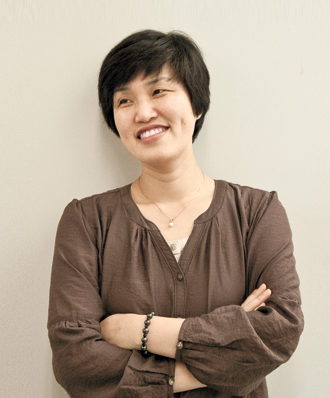 Lee Jin-hee is the founder of Bear Better, a company that provides jobs to those with autism and aims to spread social awareness. Provided by Lee Jin-hee

When Lee Jin-hee heard the news that her autistic son had tried to jump from a fourth-story window, she was stunned and heartbroken.

The incident began when the teen - who attends a regular high school rather than a special education facility - was pressured by his peers, who he considered friends.

“Jump out the window,” they taunted him. “Prove you’re not a monster.”

When her son stepped out onto the window ledge, the other students pulled him back in, shocked that he had actually tried to commit such a feat. Still, the episode hit Lee hard.

“A family’s help is not enough to alleviate the difficulty,” she said. “People don’t really know what the autism is, so I made up my mind to change the social structure in a positive way.”

Autism spectrum disorder encompasses a wide group of developmental disabilities, with symptoms ranging from mild to severe depending on the person. The disorder is often characterized by a lack of social awareness and difficulty communicating with others, as well as repetitive behaviors and patterns.

After the incident at school, Lee quit her job and set up the business Bear Better, which provides gainful employment for those with autism or other developmental disabilities.

The company has about 80 employees, who each work about four to eight hours each day.

They also learn how to run the business from start to finish, handling everything from production to packaging and delivery.

Its name, Bear Better, is short for “Bear makes the world better,” and the business’ informal mascot, a cuddly looking teddy bear, represents the idea that even those with autism, who are “as innocent as a teddy bear,” can make the world a better place.

Many with autism respond well to routine and are comfortable with processes with which they are familiar - the primary reason why the manufacturing process at Bear Better is simplified.

In a bid to improve their employees’ social skills, the company also charges them with making deliveries to give them an opportunity to interact with others. Many of Bear Better’s customers acknowledged that they didn’t notice the differences. And due to their careful and detailed technique, many regular customers often visit them to place orders.

Four employees from Bear Better were even recruited to work at the cafe inside the Naver building when it opened in Jeongja-dong, Bundang, Gyeonggi, in November 2013. There, they brew coffee, clean, wash dishes and work the cash register. “Showing society that those with autism can get along with others will make it easier to embrace them,” Lee said.

She added that those with autism have a common desire to succeed and fit in, just like everyone else.

However, because Bear Better is a small business, it often has to turn down work requests from residents in local areas.

“There are a lot of people with intellectual disabilities and autism disorder in the [areas outside of Seoul], too,” Lee said. “I hope that a company like us can rise up so people with autism can have more opportunities to play an active role in society.”