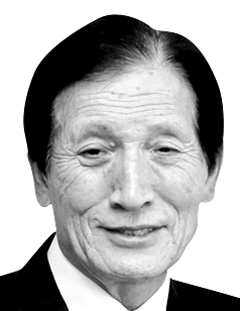 Giving back to the community is important to Jae Ta-young, the president of the Korean Red Cross branch in Seoul. But sharing and volunteering beginning early in childhood is particularly significant, he said, because it helps build character while improving public well-being.

“I persuaded my grandson, who is in elementary school, to join in volunteer and charity activities,” he said.

His 12-year-old-grandson and 9-year-old granddaughter became members of the Red Cross last year.

“Now they are pressing me to go on a voluntary service,” Jae said in an interview with the JoongAng Ilbo on March 21.

For him, paying it forward has always provided him something to focus on. Working as chief of the Seoul Metropolitan Rapid Transit Corporation, he returned 2 million won ($1,926) to the company every month. He also donated two million won a month to local charities when he served as a special adviser to Oh Se-hoon, the former mayor of Seoul, and as the director of one of the administration’s research centers.

Last year, Jae started visiting elementary, middle and high schools two to three times a month to give a guest lecture on the value of sharing and mission work.

He also arranged the “angel school campaign,” in which he certifies a school as an “angel school” if more than 30 students donate at least 1,004 won to the Red Cross. The amount is symbolic because in Korean, the figure 1,004 is pronounced cheon sa, which translates to “angel.”

About 1,963 students have participated in the campaign so far and 26 schools have been certificated as angel schools, with annual contributions totaling 550 million won.

Jae first became interested in the culture of sharing after he read about the nonprofit charity The Mission Continues in Time magazine. The organization, made up of American military veterans, redeploys them out into their communities and encourages them to give back and help others through volunteer service.

The Mission Continues was founded in August 2007 by Eric Greitens, a war veteran who served in Iraq as a U.S. Navy SEAL. About 2,103 veterans have taken his lead, including those who were injured or disabled in combat, with 5,412 participants in total. They have arranged 247 businesses, including local volunteer services.

“Korea is a suitable place to apply the American welfare model, which supplements flaws in the government’s welfare system with voluntary work,” he said. “Since our students are primary volunteers, activity from adolescent members in the Red Cross is expected to increase a lot this year.”