Traveler’s exhibition a glimpse into the Arctic

Traveler’s exhibition a glimpse into the Arctic 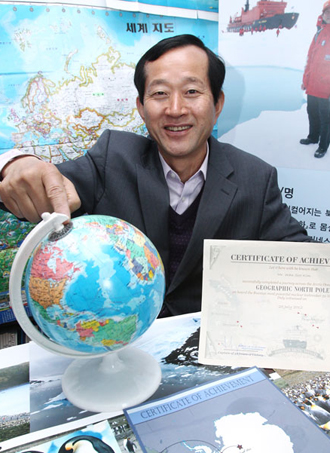 Kim Wan-su produces a certificate of his journey to the North Pole, which he got from a Russian travel agency in July 2012. By Jang Jung-pil

IKSAN - In his journeys to the North Pole and Antarctica, Kim Wan-su has had to put up with a number of grueling setbacks - a 30-hour boat ride from Argentina on the wild seas, motion sickness and, in general, the length of time it takes just to get to the end of the earth.

“But when you reach South Georgia Island [in the South Atlantic Ocean] and see about 30,000 penguins lined up from the beach to the top of the mountain, you can’t help but feel that this must be the place God visits on his vacation,” Kim said.

The 60-year-old polar explorer, who has made the journey to Antarctica three times and the North Pole 10 times, will host a photo exhibition featuring images from his travels today and tomorrow at the Iksan Somri Cultural Arts Center.

He visited both Poles back-to-back from March 14 to April 2 this year, an odyssey that required changing planes 17 times.

After a 33-hour flight from Helsinki, in Finland, to Puntarenas in Chile, across the equator, he arrived at the North Pole.

“Taking a trip to the poles is a chapter of surprises,” he said. “Swimming in a 60- by 70-centimeter (27-inch) hole in the ice, looking up into the dark night sky with the aurora borealis dancing like a dragon and a rainbow - it made my heart throb.”

Kim also visited the North Pole in July 2012, riding an ice breaker for three days and sailing more than 2,000 kilometers (1,243 miles) from Murmansk, in Russia. Less than six months later, he journeyed to Antarctica, taking a ski plane to the geographical South Pole.

“Love makes your lips tremble, but a journey makes your heart tremble,” he said. “But still, there are a lot of potential dangers to prepare for when traveling to the poles, including unforeseeable weather conditions.”

In case of emergency, he prepares a sleeping bag and a week’s worth of food.

Over the past 20 years, Kim has traveled to about 100 countries around the globe. Based on his experiences, he’s also published two travel journals, “Three, Three, Seven World Travel” and “World’s Seven Scenery Travelogue.”

The first illustrates the world’s three greatest water falls, top three most beautiful ports and the world’s seven most mysterious places. He also put together a calendar of rare scenery.

To fulfill his curiosity, he travels at least once a month. And his constant need to wander has sometimes placed him in some risky situations. While exploring the remote stretches of Australia, he was struck by appendicitis, which came close to killing him.

He also came face to face with a Kamchatka brown bear, the largest bear subspecies in Eurasia, while traveling in Russia.

Still, when he’s not traveling, he does have his full-time day job, working as a representative of a farm machinery company in Iksan. Kim is also an inventor and has patented about 100 different types of farming machinery.

After graduating from high school at 19, he was hired at an agricultural machinery company for research and development, and attended night classes, majoring in electrical engineering. Kim studied abroad in Japan and Germany as part of his education, and it was during that time that he started dreaming of traveling the world.

He went on to establish his own farm machinery company in 1988 and exported his agricultural inventions to about 10 countries, including the United States and Russia.

“Life is once and for all,” he said. “My life philosophy is to enjoy and experience everything that I can, and not to have any regrets before I die,” he said.