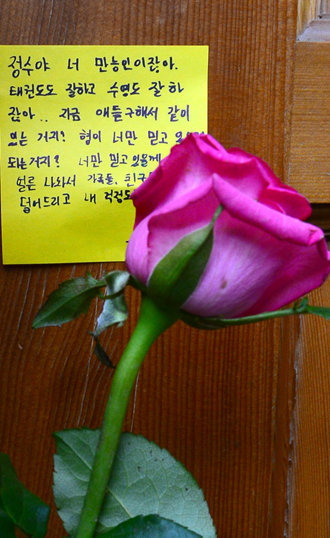 Notes on which messages of “Come back safely. I love you!” are written and a rose are placed yesterday on the door of a classroom at Danwon High School in Ansan, Gyeonggi. [NEWSIS]

President Park Geun-hye telephoned a father of one of the students missing in the ferry disaster Thursday night to assure him that her government was following up on measures she had promised a few hours earlier.

The father’s anguish continues, however, after his daughter was reported saved in the hours after the accident on Wednesday but is actually still missing, along with 267 others.

Park encountered the father, who is surnamed Moon, Thursday afternoon when she visited the gymnasium in Jindo, South Jeolla, in which hundreds of relatives are awaiting news of the fates of their missing sons and daughters.

During her visit, Moon shouted out that he needed to know if the president intended to carry out the measures she promised during the 20-minute visit to the relatives.

Park told Moon to give her his mobile phone number, and he did.

“President Park had a phone call with Mr. Moon of about five minutes after 10 p.m. last night,” said Min Kyung-wook, a Blue House spokesman, in a briefing yesterday. Min spoke to the father himself after the president finished her call.

“Mr. Moon told me the president repeatedly promised to do her best with the rescue efforts,” he said.

Park told Moon that the measures she had promised earlier Thursday - including installing television screens to enable families to monitor the rescue situation live - had been carried out.

Moon stressed that the most important thing was assigning the best rescuers to the scene so at least one life might be saved, the presidential spokesman added.

It turns out that Moon had particular reason to be distressed.

After the phone call with the president, Moon told Min that his daughter Moon Ji-sung, an 11th grader at Danwon High School, is on the list of survivors of the tragedy released Wednesday night, day one of the accident, by the Central Disaster and Safety Countermeasures Headquarters, which is under the Ministry of Security and Public Administration.

But she is obviously missing and is not on the list of survivors issued by the Korea Coast Guard.

“I kept searching for my daughter, even in every drain across Jindo,” Moon told the presidential spokesman, “but in vain.”

Even after the phone call between the father and the president of the country, the central disaster headquarters was not aware of the discrepancy in the information about Moon’s daughter Ji-sung.

“We released the list of rescued people based on data from the Korea Coast Guard,” said a spokesman with the headquarters when first asked yesterday morning about the girl. For hours, the spokesman said he was checking.

Around 2 p.m. yesterday, Moon Ji-sung was removed from the list of survivors.

The list had not been updated since it was released Wednesday night. In the meantime, the number of those saved climbed from 174 to 179.

The president canceled all of her scheduled events yesterday and all Blue House officials were ordered to be in a round-the-clock state of emergency.