Probe finds captain was not at helm of the ship

Probe finds captain was not at helm of the ship 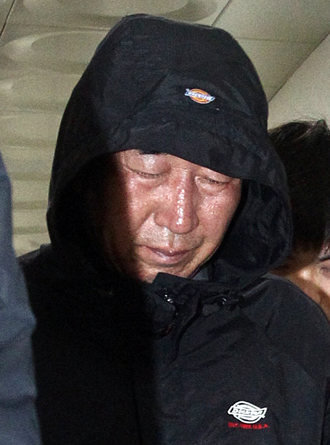 Lee Jun-seok, the captain of the ferry Sewol, is taken Thursday afternoon out of the Mokpo Coast Guard after being investigated. By Jang Jung-pil

A joint investigation by the police and prosecution has revealed that a third mate, not the captain, was operating the Sewol passenger ferry when it capsized Wednesday in waters off the southwestern coast, leaving hundreds missing and at least 28 dead.

The prosecution yesterday evening issued arrest warrants for Lee Jun-seok, the captain of the ship, the third mate and an additional sailor for violating the additional punishment law on specific crimes.

The law adds gravity to punitive measures for a specific violation in instances in which the crime is too great or the level of legal punishment is considered too light.

“The captain was not steering the wheel at the time of the accident,” a spokesman at the temporary investigation headquarters at the local coast guard in Mokpo, South Jeolla, said in a briefing yesterday. “The person in charge of the ship was a third-class sailor.”

Mokpo is near Jindo County, where the disaster occurred.

The 26-year-old mate, known only by her surname Park, was a novice who joined Chonghaejin Marine Company, the ferry operator, only five months earlier.

She previously completed her overseas service sailing on a ship in the waters around China.

The spokesman said it is still unclear whether the captain was out of the ferry’s bridge, where the ship is commanded.

“The captain’s exact location is unclear because crew members gave different statements,” the spokesman said. “Some say the captain left the bridge to get changed, while others say he was at the back of the room.”

Conventionally, at least two people are required to man the bridge at all times.

Prior to the investigation, Lee, 69, the ferry’s captain, was believed to be operating the vessel.

However, he is unlikely to avoid the blame and legal responsibility for leaving the vessel and being one of the first of 50 people rescued by Coast Guard lifeboats. The captain and 19 other crew members, out of a total 29 staff, safely escaped the ferry.

Under the Seafarers Act, the heaviest punishment that the ferry’s captain could receive for abandoning his ship and its passengers is a five-year jail term.

The probe also revealed that Lee, who drove the vessel on behalf of a 47-year-old chief mate on vacation, was a second-class mate.

Even though such officers are qualified to operate any vessel, the fact that one of the largest ferries in Korea was not operated in the hands of the ship’s chief officer has sparked controversy.

Investigators summoned Lee for questioning for a third time yesterday and also summoned another crew member who was rescued alongside the captain.

The prosecution is considering charging Lee with professional negligence that resulted in death and is looking into whether the captain could also be charged with neglecting his duty by having a subordinate man the ship while taking a route considered high risk.

Yesterday, video footage showed Lee disembarking from the rescue boat at 11:16 a.m. - nearly two hours and 20 minutes after the first distress call was made at 8:58 a.m. Lee was accompanied by three other crew members, who were seen leaving the rescue boat before than the high school students who were with them.