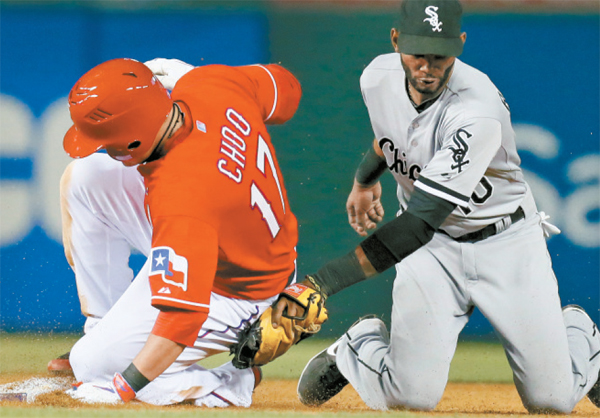 Choo Shin-soo of the Texas Rangers contributed to the team’s 6-3 victory on Saturday night with three hits including two doubles against a lefty pitcher. Rangers starter Colby Lewis pitched into the sixth inning for his first win in nearly two years.

Lewis (1-1) struck out four while allowing only one run over 5 1-3 innings. The right-hander, the first known major league pitcher to return from a unique hip procedure, won for the first time since June 17, 2012.

Choo and Alex Rios each had three hits for the Rangers, who won their fifth consecutive game. Kevin Kouzmanoff homered leading off the eighth, giving him a 10-game hitting streak to start his Rangers career.

Texas went ahead to stay on Fielder’s high-arching blast to right leading off the fourth for a 2-1 lead. It was only his second homer in his 18 games with Texas.

Before his season debut Monday night, a home loss to Seattle, Lewis hadn’t made a major league start since July 18, 2012. The 34-year-old right-hander had surgery to repair a torn flexor tendon in his right elbow, and was still rehabbing from that last August when he had right hip resurfacing surgery, a procedure to remove bone spurs without a full hip replacement.

Joakim Soria, the fifth Texas reliever, worked a perfect ninth for his third save in four chances.

Dayan Viciedo’s two-run single in the eighth got the White Sox within 5-3 before Alexei Ramirez, who entered the game with a AL-leading .379 batting average, grounded into an inning-ending double play.

Ramirez finished 0 for 4 to snap his 21-game hitting streak, the longest hitting streak by a White Sox player since Carlos Lee’s franchise-record 28 in a row 10 years ago, and drop his average to .357.

Josh Wilson had a two-run single in the fourth for Texas before Choo’s RBI-double made it 5-1. Chicago opened the second inning with three consecutive singles - equaling its season-low hit total from the night before in a span of five pitches.

Ramirez then grounded into a double play to send home a run that tied the game at 1.

Texas had three consecutive hits in the first, though No. 2 Elvis Andrus got tagged out in a rundown between first and second base after his single. Rios had an RBI double for a 1-0 lead and to stretch his hitting streak to six games.

After Andrus was tagged out diving back into first, Texas manager Ron Washington took one step out of the dugout like he might challenge the play. He instead returned to his seat, and TV replays showed that Andrus was indeed out.