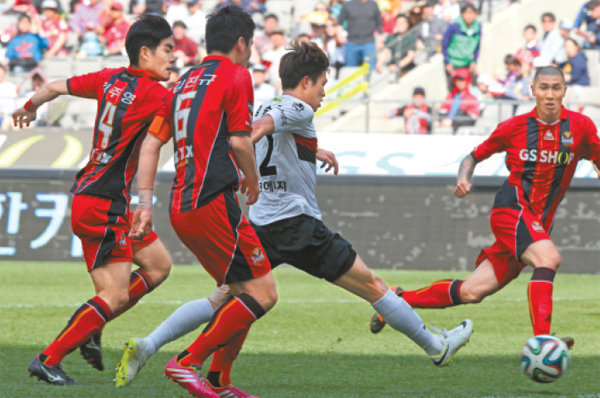 Kim Seung-dae of the Pohang Steelers, second from right, scores a goal during his Round 9 K-League Classic match against FC Seoul yesterday at the World Cup Stadium in Sangam-dong, western Seoul. By Yang Gwang-sam

The Pohang Steelers secured their lead in the K-League Classic by beating FC Seoul 1-0 with a goal scored by forward Kim Seung-dae.

In the Round 9 K-League Classic match at Seoul World Cup Stadium yesterday, the Steelers picked up three points that secured their top position in the league. The Steelers now have a record of six wins, one draw and two losses for a total of 19 points. It was also the Steelers’ first win in Seoul against FC Seoul since August 2006.

In his 4-4-2 formation, coach Hwang Sun-hong put Kim and Yoo Chang-hyun on the top of the offense line with midfielders Kang Su-il and Kim Jae-sung backing them up on the wings.

FC Seoul, led by coach Choi Yong-soo, started the match with a 4-3-3 formation, with striker Kim Hyun-sung on the top of the offense line and wingers Yoon Il-rok and Sergio Escudero of Spain playing behind.

The only goal of the match came in the 78th minute. Kim Seung-dae penetrated into FC Seoul’s penalty area after he passed the ball to midfielder Kim Jae-sung. Forward Kim then put the ball into the net with his right foot after receiving it back from the midfielder.

Coach Choi of Seoul then replaced midfielder Lee Sang-hyub with Brazilian forward Rafael Costa in an attempt to equalize the game. But even though the Steelers were down to 10 players, following the ejection of midfielder Hwang Ji-soo with his second yellow card in the 84th minute, FC Seoul was unable to score.

“It was a tough match,” coach Hwang said. “I was satisfied with the score, but I didn’t like the performance that the team showed on the field today. Without Lee Myung-joo, who is our core player in creating scoring chances, it was hard to break down Seoul’s defense. We were kind of lucky to win this one.”

On Saturday, the Jeonbuk Hyundai Motors had a hard time managing the tight schedule of the Asia Champions League and the K-League but managed to overpower the Chunnam Dragons, 2-0. Picking up three points, the Motors ended the week in second place with a record of five wins, two draws and two losses.

Considering that the Motors will have an AFC match against Melbourne Victory FC of Australia tomorrow, people expected the Motors to start many players from its bench, but coach Choi Kang-hee began the match with his usual best 11.

Striker Lee Dong-gook gave the Motors a 1-0 lead in the 30th minute as he put the ball into the net with a header after it was crossed from right outside of the penalty box by Lee Kyu-ro. The striker was replaced by Han Kyo-won in the 60th minute as his injured his right foot got worse during the match. But Han filled in nicely, scoring the team’s second goal in the 82nd minute.

“I considered giving some rest to some of my best 11 players,” Choi said in a post-match interview. “But since our goal is to win both the AFC and K-League title, I didn’t want to take a risk against the league’s third-place club. Because the match against the Australian club begins at 8 p.m., I think we have enough time to physically recover.”

Over the last two weeks, the Motors played twice a week, making fatigue a factor. In an AFC match against the Yokohama Marinos of Japan on April 15, the Motors failed to secure a 1-0 lead as their midfielders and defenders ran out of fuel late in the second half, leading to a 2-1 loss.

The Motors need at least a draw against Melbourne to advance to the next round. The Match will be held on their home field, Jeonju World Cup Stadium, in North Jeolla.

“Midfielder Kim Ki-hee and defender Alex Wilkinson were the key to the defense,” Choi recalled. “And they maintained their concentration until the very last minutes.”