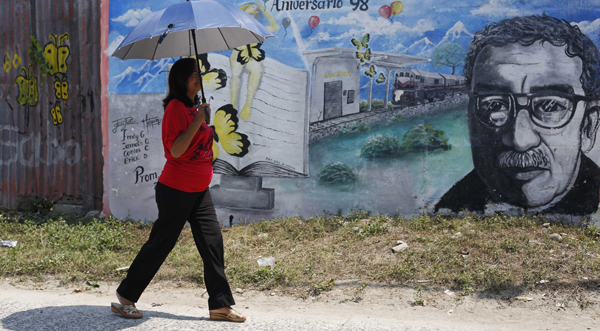 A woman passes by a mural in honor of Colombian author Gabriel Garcia Marquez in Aracataca on Friday. Garcia Marquez, whose beguiling stories of love and longing brought Latin America to life for millions of readers and put magical realism on the literary map, died on Thursday. He was 87. [REUTERS/NEWS1]

ARACATACA, Colombia - The Colombian town that was Gabriel Garcia Marquez’s birthplace and inspired him to write “One Hundred Years of Solitude” mourned its Nobel Prize-winning author on Friday with music, candles and flowers.

A day after Garcia Marquez’s death, his cousin Nicolas Ricardo Arias leafed through dog-eared photographs and recalled with a smile the family reunions on the rare occasions when Aracataca’s famous son returned home.

“I remember him with his whisky and his jokes,” said Arias, 78, on the porch of his humble home in the town near Colombia’s Caribbean coast. “This is a very special day of sadness and memories .?.?. Today we will just remember Gabriel.”

Garcia Marquez, who died at his home in Mexico City on Thursday, spent the first years of his life in Aracataca and drew on it for some characters and tales in “One Hundred Years of Solitude.”

Dozens of mourners gathered on Friday at a shrine of flowers and candles on the piece of land where he was born. Musicians played guitar and sang ballads commemorating his life.

“We heard he had died, and we rushed right here,” said one resident, Sara Parodis, as she made cut-out yellow butterflies, a tribute to the swarms of butterflies that appeared in the classic novel whenever one character’s forbidden lover arrived.

“This is the end of a very important era,” Parodis said, pinning one of her butterflies on the lapel of a mourner.

“One Hundred Years of Solitude” tells the epic, dream-like story of seven generations of the Buendia family in the fictional town of Macondo, based largely on Aracataca. Garcia Marquez said he drew on the stories that his grandmother told him when he was a child, laced with folklore, superstition and the supernatural.

The novel sold over 30 million copies, helped Garcia Marquez win the 1982 Nobel Prize for Literature and popularized the genre of magical realism. In it, characters are visited by ghosts, a plague of insomnia envelops Macondo, a priest levitates above the ground and the child of an incestuous couple is born with a pig’s tail.

It made Aracataca famous and drew literary pilgrims hoping to absorb some of the bewitching energy he wrote about.

But there is little magic in the Aracataca of today, and it retains no evidence of the banana wealth which washed over northern Colombia in the early 20th century.

Concrete buildings have replaced the elegant wooden homes and offices set up by plantation owners, political slogans splash the walls and residents sit on street corners sipping beer, complaining that the government failed to harness the opportunity that Garcia Marquez’s fame brought.

A wooden replica of his grandparents’ home seeks to create a sense of the past. His comments are displayed on giant posters above his bed and at the dining room table plates are laid out as if waiting for him to join the family for dinner.

Photos show the appalling conditions endured by workers at a nearby banana plantation that led to a 1928 strike and the massacre of thousands. He portrayed the slaughter in “One Hundred Years of Solitude” and used the real name of the military officer who led the attack, General Cortes Vargas, the only historically accurate name in the entire novel.

Since Garcia Marquez’s death on Thursday, tributes have poured in from U.S. President Barack Obama, former President Bill Clinton and poets, presidents and pop stars from across Latin America. He was the region’s most famous and beloved author, known affectionately as “Gabo”.

“When someone like him writes that way, he ties you to them like a brother and makes you love him as if you had known him,” Arturo Covarrubias, a 46-year-old mariachi musician, said at a book fair in Mexico City on Friday.

“The work of men like him is immortal,” Cuban President Raul Castro said. Garcia Marquez, a leftist who flirted with communism, was a decades-long friend of Cuba’s revolutionary leader Fidel Castro, Raul’s older brother.

While Aracataca’s past glories have faded, residents still remember their own grandparents’ tales of years ago.

“My grandmother told me of the music and dancing in the square, of the plantation owners who would come by, and Gabo and his visits,” said Parodis. “The memories are from another time.”