If it’s Sunday, these must be Seoul’s Italians

If it’s Sunday, these must be Seoul’s Italians 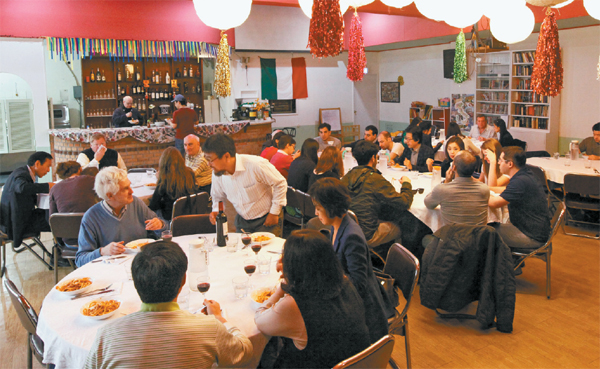 The chapel for the Conventual Franciscans in Hannam-dong, Yongsan District, has become a gathering place for Italians in Seoul to eat, pray and socialize on Sundays. By Park Sang-moon

In 1964, the Rev. Vittorio Di Nardo left his native Italy to come to Korea for missionary work.

This was when war-torn Korea had an income level on a par with that of Ghana and was devoid of any civil aviation infrastructure to speak of.

Di Nardo had to travel by sea on a route that took him from Marseille to Mumbai, which was still called Bombay, then Hong Kong and finally to Korea’s southern port city of Busan.

And then he began a journey of 50 years as a resident of Korea.


Di Nardo, who uses the Korean name Seung-deok, currently serves at the chapel of St. Francis of the Conventual Friary in Hannam-dong, central Seoul, leading Sunday mass in Italian.

The chapel has developed into a gathering place for Italians in Seoul, where the expats eat, pray and socialize at regular events like a weekly Sunday lunch and a monthly movie screening.

The first group of Italians in postwar Korea consisted of a handful of missionaries. Catholicism is the largest religion in Italy, with nearly 90 percent of the population classifying themselves as Roman Catholic. It’s one of the country’s most important exports as a result. 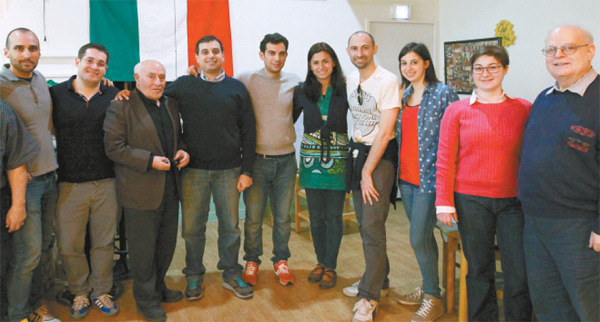 The first group of Italians in the postwar era, like Rev. Vittorio Di Nardo, third from left, and Vincenzo Fraterrigo, far right, came to Korea as missionaries. Over the past few years, younger professionals have made their way to Seoul. By Park Sang-moon

After Korea transformed itself from a poverty-stricken country into a technology powerhouse, the majority of the over 200 Italian residents in Korea are now younger professionals who see Korea not as a devastated country desperately in need of God’s blessing but as a strategic base for business partnerships.

And the younger generation can travel between the two countries in less than 15 hours.

“Things changed a lot,” says Di Nardo, who speaks Korean as fluently as a native speaker.

“Only a few Italians were in Korea when I first came here, and they were mostly pastors,” he recalls. “Now the number has increased significantly, and the jobs the Italians hold are diversified.”

Some work for multinational fashion or electronics companies while others hold teaching jobs or study as exchange students.

“Italians work for different companies here such as Max Mara, Fiat and STMicroelectronics,” says Francesco Paolo Cannito, who works at the Italian Embassy near the chapel.

He said that Italians in Seoul don’t tend to live in one particular area, as the French do in Seorae Village.

“There is no specific residential area where Italians gather to live,” he says. “But I think there are two popular places: the Hannam-dong area and Gangnam. Some Italians live in Hannam-dong because the neighborhood is near expat-friendly Itaewon, and the Italian Embassy and cultural institute are all located in Hannam-dong. Others live in Gangnam because it’s close to their working places.”

The number of participants for the get-togethers is not fixed and fluctuates between 20 and 50.

“On a beautiful spring day like today, many people will go on a picnic rather than turn up for Mass,” Di Nardo says. Some 20 Italians showed up for the April 13 congregation.

“More people tend to show up in the winter season,” he says. 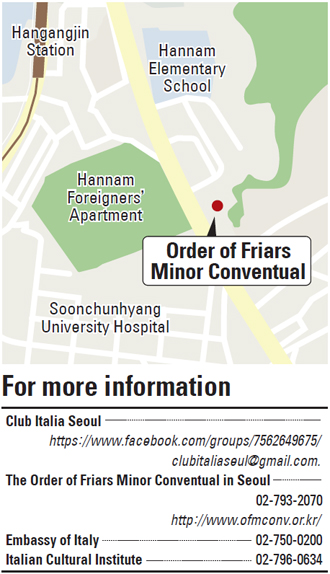 The Order of Friars Minor Conventual, commonly known as the Conventual Franciscans, is a branch of the order of Catholic Friars founded by St. Francis of Assisi in 1209. St. Francis is a venerated figure who stressed God’s brotherhood with all people, rich and poor. The current Pope Francis took his papal name from St. Francis of Assisi to honor the saint’s philosophy. He is the first pope to have taken the name Francis.

Built in 1966, the chapel is devoted to serving Conventual Franciscans in Seoul and offering foreign language masses (Italian, German, English and Spanish) on Sundays.

Aside from Mass, the highlight of the Sunday gatherings is a weekly luncheon that begins at 1:00 p.m. in the basement of the chapel.

Organized by members of Club Italia Seoul since 1991, the luncheon serves home-style Italian food to both Italians and non-Italians.

Reservations must be made a few days in advance via the group’s Facebook page, Club Italia Seoul, or via email at clubitaliaseul@gmail.com.

Major events include the Carnevale in February, at which children and parents dress up and celebrate together with food.

The Sunday gatherings are far from obligatory and more of a loosely formed private meeting.

“Here, many people come and go,” said Elisa Quaglia, a member of the Seoul Italia Club.

“This is because some people are long-term residents while others only stay here temporarily,” she continues. “But you would feel the warmth and welcoming atmosphere here because, being expats, people try to take care of each other.”

A menu of three main dishes, dessert and coffee is served for 18,000 won ($17.40), a reasonable price given that some less-than-authentic Italian restaurants in Seoul charge a similar amount for a single dish.

“I enjoy coming here because the food is decent and I can meet people from a similar background,” says Gennaro Macina, who was visiting Korea on a business trip.

Proceeds from the luncheons are used for charitable causes, says Vincenzo Fraterrigo, who prepares and manages the luncheons.

During the weekday, Fraterrigo serves as a professor of Italian at Hankuk University of Foreign Studies and voluntarily supports the Sunday events.

Fraterrigo first came to Korea about 30 years ago for missionary work.

“When I attended Yonsei University to learn Korean,” he says, “the country was under military dictatorship. One day, a military officer who was there to clamp down on student demonstrations approached me and quibbled over why I was studying in Korea and not in my native country.”

When asked why he sacrifices his weekend to work at the Italian club, Fraterrigo says, “I just like seeing people who are away from their home country trying to find connections and searching for a taste of home.”

“Unless anything particular happens, I think I will stay here on weekends.”

·How to get there

The Order of Friars Minor Conventual is located in Hannam-dong next to an SK gas station and the Italian Embassy.