Lighting Lantern Festival will be a bit darker this year

Lighting Lantern Festival will be a bit darker this year 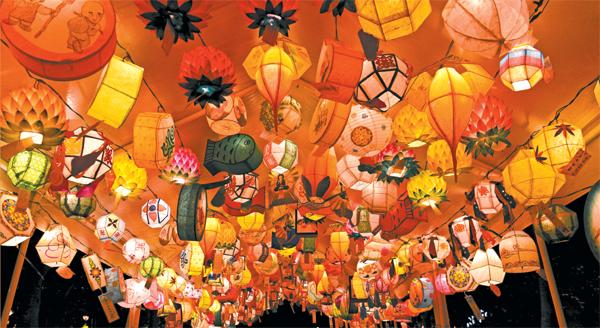 To express condolences to the families and friends of those killed or missing in last Wednesday’s tragic ferry accident, lanterns of mourning will be lit Saturday during Yeondeunghoe, the Lighting Lantern Festival.

Organizers of the three-day festival starting Friday to celebrate the birth of Buddha have canceled many festive events and performances.

“The entire country is in pain,” said Kang Mun-jeong, project manager of the festival. “So we changed the big theme of the festival and are trying to finalize other details.”

The major event of the festival, the Lantern Parade, will go on as scheduled - minus festive music and performances - on roads in central Seoul from Dongguk University to Jogye Temple. The lead group will hold plainer, less colorful lanterns than usual. Many other scheduled events will exclude dances and other upbeat activities.

Yeondeunghoe, designated as Important Intangible Cultural Heritage No. 122, originated in Silla times (57 B.C. - A.D. 935). Lanterns will remain lit until May 11 in many areas around Seoul as Buddha’s Birthday falls on May 6 this year. 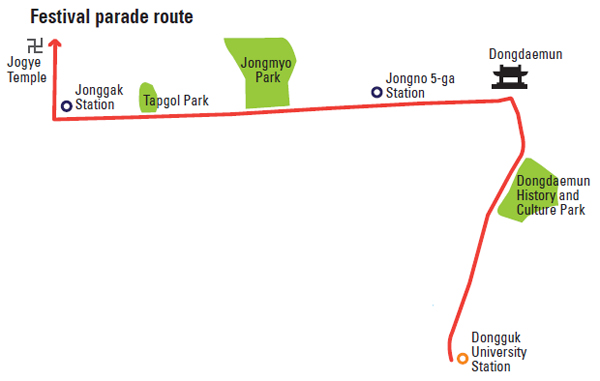 Traditionally, the festival showcases the beauty of brightly decorated lanterns made from hanji, or traditional Korean paper, as well as the joy of making lanterns and participating in the lantern walk with others.

“The Lighting Lantern Festival is a folk custom that has been handed down,” said Kang, festival project manager. “The festival is about preserving the old tradition, so it can be considered a cultural event.”

Kang added that making small lanterns was popular even before the Joseon era (1392-1910), as children would make their own lights and run around their neighborhoods with them. To Kang, that is what makes Korea’s version of the lantern festival different than those of other Asian countries: the emphasis on the parade of lanterns and walking together.

“Each lantern carries significance, as each is a different shape, and children make their own wishes while making one,” she said. 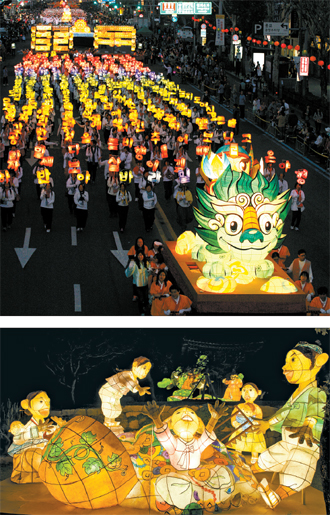 Top: People walk down the street in Jongno, central Seoul, holding lanterns shaped like Korean letters. Above: Lanterns on display in Jongno during last year’s lantern festival. Provided by the festival

“Just like many decorate Christmas trees, whether or not they are Christians, anyone can be part of Korea’s folk tradition by coming to the road and walking down the streets while they are filled with lanterns.”

As Christmas has become a major festival for non-Christians, the organizers for this year’s Yeondeunghoe are trying to make the festival of light and lanterns into something more universal.

As part of efforts to broaden the appeal of the festival, organizers have been gathering an international crew of volunteers to help. Of 100 English-speaking volunteers, half are foreigners coming from 22 countries, including Brazil, India, Pakistan, Finland and Belgium.

Pakistani student Hera Istikhar has been in Korea for a year, studying the language, and was accepted into Korea University as an undergraduate earlier this month. The 21-year-old is Muslim, but since March she has been working as a volunteer for Yeondeunghoe.

“Although I’m not Buddhist, being in the program made me learn how to lead a life,” Istikhar said.

Istikhar said that since she started training to become a volunteer, she has met with other volunteers once a week, prepping for the event and learning more about Korean history and culture - as well as lanterns, of course.

“I’m happy that I now have something to give back to Korea by doing volunteer work,” she said.

All who want to participate can come and make their own lotus-shaped lanterns using different colors or petals to make theirs unique (although, these days, LED lights are usually used instead of open flames).

Making a lotus-flower lantern takes about two hours and requires signing up in advance. As of yesterday afternoon, there were still about 80 spots available.

Throughout the festival there are many cultural events, like learning about traditional crafts and food, but in the evenings, the lanterns are lit and the walks begin.

“It is a good chance to experience something very traditional in the urban scene,” said Jeon Min-hae, a senior at Ewha Womans University who participated in last year’s march.

While individuals will light the street with their own lanterns, the Jongno area will be shining with many larger lanterns specially made for the event. At Gwanghwamun Plaza, there will be a 20-meter-high (65-foot-high) lantern shaped like the famous Mireuksaji stone pagoda in Iksan, North Jeolla.

*The Lighting Lantern Festival runs Friday through Sunday near Jongno, from Jogye Temple to Dongguk University in central Seoul. Lotus flower lantern making, available for foreigners only, will be available from 11 a.m. to 2 p.m. and from 2 p.m. to 6 p.m. Sunday, in the road in front of Jogye Temple. For more information call (02) 722-2206 or go to the website at www.llf.or.kr.