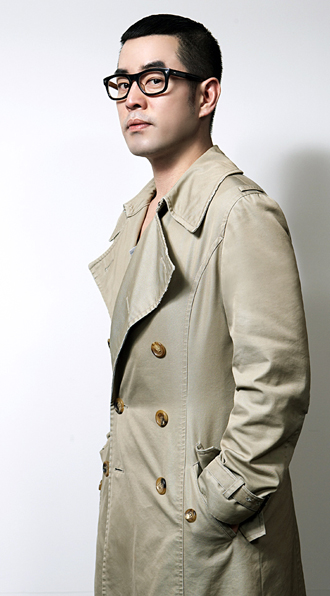 Of the countless Korean fashion labels, no brand has such a huge international following as menswear brand Juun.J.

The brand, led by designer Jung Wook-jun, who is also known as Juun.J, is already sold at 65 stores across 33 countries, but for three weeks starting June 13, there will be 12 Juun.J pop-up stores appearing in fashion capitals like New York, Paris, London and Milan.

The opening of the pop-up stores is designed to overlap with several fashion events happening in Paris, Milan and London, and the temporary shops are expected to bring further publicity to Juun.J, which has been in the clothing market over the past 15 years.

The JoongAng Ilbo recently sat down with Jung and talked about his achievements, his recent stint making costumes for “The Hunger Games: Catching Fire” (2013) and his newly acquired membership to the French Federation of Fashion and of Ready-to-Wear of Couturiers and Fashion Designers. Here are the excerpts:

Q. Why did these shops in Milan, Paris, New York and London decide to open pop-up stores only for you?

A. I got offers from some retail stores like Barneys New York and select shops like Paris-based L’Eclaireur to make exclusive lines of Juun.J for each store but Juun.J is already available in 65 shops across 30 countries. In addition, the rival shops of Barneys and L’Eclaireur all have Juun.J, so I proposed opening pop-up stores instead of exclusive lines. I wasn’t sure whether they would accept my offer or not because they are all well regarded shops that are picky about selecting brands but, luckily, they all took my offer. I guess Juun.J is quite popular [laughs].

You’ve designed many different things but your sweatshirts made from neoprene are your biggest hit so far, bringing Juun.J more publicity than ever.

People always want something new. It was around the time when street fashion was all the rage. Every designer made clothes with flamboyant prints and huge logos. I wanted to be different and came to think of the neoprene sweatshirt. Since the fabric is usually used for wetsuits, nobody thought of it as something for everyday clothes, because of its breathability. But it has advantages, too. You can get clearer and edgier prints that are closer to actual images. So I talked a lot with a fabric company that could produce the sweatshirt. A month after my neoprene sweatshirt was being shown to the market, a famous French womenswear brand came up with a similar product and it instantly became a huge hit. The brand was much bigger than Juun.J in terms of sales and brand recognition. Looking at it, I thought to myself “What if Juun.J were more recognized than the French brand? Then, we might have achieved bigger success.” But you may expect the next hit from Juun.J.

From left:This sweatshirt made from neoprene is considered Juun.J’s biggest hit; Neoprene is not usually used for everyday clothes, but Juun.J likes to use the material because he can create clearer and edgier prints on it; The model wears a leather jacket made from the skin of unborn calves. It is matched with wide pants; The unlikely match of a wool-blend coat and a leather baseball cap; A long coat made from unborn-calf leather is matched with cropped pants and long leather boots.


The neoprene sweatshirt was indeed a hit, but some critics say that kind of clothing is a bit much. It is oversized with fierce prints on it, and it looks like a difficult choice for ordinary people. What do you say?

Don’t take it seriously. Think about it as the last piece that completes your look. I think anyone can try it as long as you match the sweatshirt with simple pants and accessories.

You made costumes for the leads of the Hollywood blockbuster “The Hunger Games: Catching Fire” last year. How did you end up doing that?

Famed costume designer Trish Summerville contacted me. We didn’t have a connection but she wanted me to make some costumes for the leads, like Josh Hutcherson. I was thrilled to know that she knows about Juun.J. I have more things to tell you about this. Pop singers Kanye West and Rihanna also asked me to make them stage outfits. Rihanna took to the stage wearing a top and bottom by Juun.J during her world tour last year.

As for costume-making for films, I had already made costumes for some Korean films, like “Volcano High” (2001) and “Rikidozan” (2004).

Pop singer Rihanna asked Jung to make stage outfits for her. This outfit was made by Jung.

What does it mean to you to become a member of the French Federation of Fashion and of Ready-to-Wear of Couturiers and Fashion Designers?

Being in the federation says, “Jung Wook-jun is Korean as well as Parisian. Juun.J is a Korean brand but it is also a French brand.” It means that they treat me and the brand as part of Paris collection. Priorities are also given to federation members when we create the Paris collection schedules.


You’ve been doing well ever since you debuted in the fashion scene. But have you ever faced any difficult moments as a fashion designer?

If I have to describe myself, I’m like an ant, which means I keep working day after day, planning the next day’s schedule every night. But if you don’t take on more than you could handle, you have a better chance of success.

Looking back on my career, I was working in the brand design department of a company, but I began my fashion business in 1999 with a small store that was about 19 square meters (204 square feet) in Garosu-gil [southern Seoul], when the area wasn’t as crowded as it is now. The deposit for that small space was 30 million won [$28,846] and I paid 700,000 won monthly for rent. The business went well, so I moved into a larger, two-story building near the first shop and began to make a name for myself as I debuted in Seoul Fashion Week.

I did my first show for Paris Fashion Week in 2007 with the money I earned from a TV home-shopping channel.

I had these goals: I will have my own brand at age of 30 and will stage a show in Paris at 40. With these in mind, I tried to put those goals into action, step by step.

Juun.J was acquired by Cheil Industries (currently Samsung Everland) in 2011. During your January Paris show, you paired your creations with the latest products by Samsung Electronics, like the Galaxy Note. As an individual designer, what does it mean to work with a conglomerate like Samsung Everland?

It’s not always easy to juggle the job of businessman and designer. Luckily, I think I’m good at making clothes for everyone without losing my creativity. And a big company also has a bigger supportive network, which I find more strategic and efficient in promoting my brand.

As for the January Paris fashion show, I think it was a chance to highlight the futuristic and creative sides of my clothes by matching them with such high-tech gadgets, even before the launch of the Galaxy Note.

The collaboration also proved to the world that Juun.J is worthy enough to collaborate with Samsung Electronics.