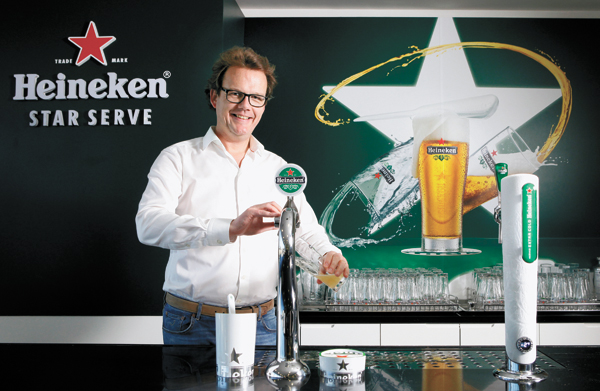 As Jan Arie Smit, general manager of Heineken Korea, stands at the draft beer bar inside his office building in Daechi-dong, southern Seoul, he seems to fit in well. As he opens the tap, fresh lager straight from the Netherlands pours into a rinsed glass he holds at a 45-degree angle. When the glass is three-quarters full, Smit levels it for the finish. After placing the glass on a drip tray, he skims the foam with a wet spatula before serving.

Although the process looks simple, Smit has demonstrated five important beer-serving steps. The technique is taught by Heineken to bartenders around the globe to improve and maintain the quality of its beer. It’s called the Star Serve program.

“We started a program last year called Star Serve [in Korea],” Smit says in an interview with the Korea JoongAng Daily. “We train bar staff how to pour a perfect glass of Heineken. The glass has to be clean, the beer has to be good quality, and the way you pour it and how you skim and bring it to the table - that’s a whole process, and if you do it properly, I guarantee people will enjoy a glass of beer much more.”

Based on its focus on premium beer, Heineken Korea has adjusted well to the local market over the years and maintained a prominent position in the increasingly competitive imported beer industry in the country. The top three international beer brands in Korea are Heineken, Budweiser and Asahi, among more than 200 foreign brands available.

“It’s quite a lot,” Smit says. “But it’s nice because if you look at Korean consumers, compared to others in Asia, they are really looking for variety and quality. It’s quite a high quality of life that Koreans live, and therefore you see there’s a lot of opportunity for many brands in the Koran market.”

Q. Heineken Korea was established in 2003, although the beer was here for many years. How has business been?

A. It’s been an interesting time. We started in 2003, and there was strong growth. And then in 2008, the economic crisis hit. That made quite an impact in the market, but despite the crisis, imported beer sales were growing in Korea, not as fast as before, but growing. What you saw after the crisis, in 2010, was a lot of additional beers coming into Korea. I won’t say it exploded, but there was a significant increase in new beer. If you ask why it picked up, there was already interest previously, but not much variety. There was demand within the Korean population, and many Koreans have been traveling abroad and had been exposed to international beer brands. On top of that, you saw the exchange rate of the won to the dollar and euro becoming more favorable for importing beer.

There are more than 200 import beer brands available in Korea. This is a significant increase from, let’s say, 10 years ago. What is the reason?

Korean consumers’ lifestyle has changed significantly. Their demands for new things in the gourmet industry resulted in a huge variety of food and beer choices. In addition to that, higher income levels have allowed people to afford more premium and sophisticated goods. You see a lot of opportunity for many [beer] brands to have a position in the Korean market. Some are smaller and others bigger, but Koreans are looking for more variety and they are open to trying this and trying that, and that’s very nice. I really like that. 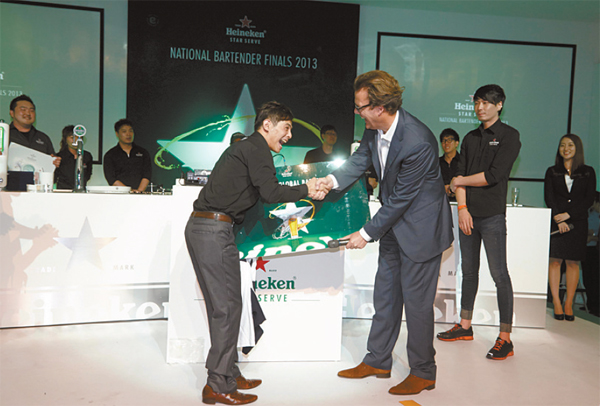 Jan Arie Smit shakes hands with the winner of Heineken’s National Bartender Finals event that chooses the best bartender based on Heineken’s Star Serve steps, in September, last year. Provided by the company


More imported beer, however, means more competition for Heineken. How is your beer different?

There are many beers around that people can try. Heineken is a brand that is high-quality beer with purely natural ingredients. Its quality has been very consistent for the 140 years it has existed. Besides having good beer, we also bring new experiences to our consumers with marketing activities and platforms like music events. Heineken is globally one of the biggest beer brands in music festival sponsorship. We really want to bring our consumers experiences that they otherwise would not have. Last year, we did Sensation, an event which is unheard of. It’s not just an event with a DJ, but it’s a complete show, it’s something else other than a normal show where participants dress up in white, drink Heineken and have great fun. That’s the kind of thing we like to do, to entertain and bring new things to our customers. That’s the way we stand out and really create a preference among consumers.

Currently, there is a strong growth of imported beers in hypermarkets, and we obviously benefit from that. At the same time, we have an equal focus on bars and restaurants, where consumers enjoy their good glass of Heineken at the moment of purchase. To be sure that this glass of Heineken is perfect, we started out Star Serve program last year. Star Serve is a program in which bar staff are trained to pour a really good glass of Heineken. Over the past months, our draft beer master has provided training to more than 200 outlets.

Does Heineken Korea have a production facility here? What is the volume of Heineken’s investment in the local market as of 2013?

All Heineken beer in Korea is brewed and bottled in the Netherlands. So our main investment in Korea is in marketing programs and employees’ salary and benefits. We increased investment in marketing over 300 percent in the past five years. In addition, we introduced more than 2,500 draft beer systems that are what we call “green” and use 30 percent less energy.

As for employees, at the beginning of 2014, Heineken Korea hired 12 more staff members. Heineken Korea has 125 employees which is 50 percent more than three years ago. Every year, we decide whether or not we should expand further. 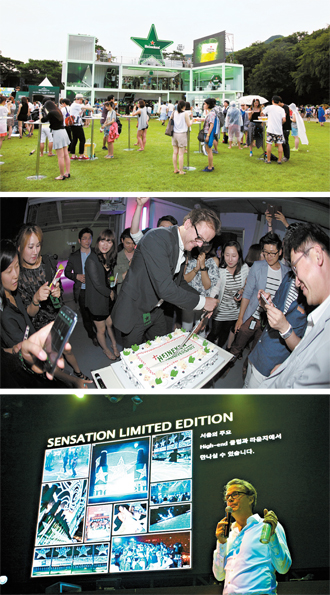 From top: A view of the Heineken Korea booth at the 2013 Jisan World Rock Festival. Heineken was an official sponsor of the event; Jan Arie Smit, general manager of Heineken Korea, cuts a cake celebrating the 10th anniversary of Heineken Korea last year in Cheongdam-dong, southern Seoul; Smit gives a presentation about the Sensation Limited Edition at a press conference last year at Club Ellui in southern Seoul. Provided by the company


Beer consumption in Asia versus Europe is growing. Does this mean a shift of business for Heineken?

It’s not a shift in focus, but certainly Asia is very important. If you see the growth of income in Asia, there are opportunities. It’s the same as what you see in Korea with imported beer. Korea has had economic growth and people are looking for beautiful products, quality products and more than local beer brands.

As for Korean brewers, there are OB and Hite-Jinro, and one more, Lotte, is expected to join. How will this affect the imported beer market, and Heineken in particular?

If you look at the total beer market in Korea [1.8 billion liters annually], I do see more Koreans looking for better quality and variety. If you go out these days, there are more people choosing a variety of alcoholic drinks. I think if you look at the international beer industry, there’s absolutely potential for growth in coming years. This is also why Hite-Jinro has come up with Queen’s Ale and OB with a new beer [Aleston]. Everybody’s fighting. But competition always benefits consumers, and we are highly confident competing in this environment.

How did you personally become involved in the beer industry?

It’s a nice story. When I was graduating, the labor market in the Netherlands was very positive, so I was able to choose between two, three companies. I chose Heineken because people there, without exception, were all positive minded, honest, fair and respectful to others. That for me was so significant that I thought to myself “I’m going to work for Heineken.” When I called my mother and told her I have a job at Heineken, she said, “Let’s have dinner,” and I went. Apparently, at the age of about 16, which is the legal drinking age in Holland, I had been collecting a lot of Heineken goodies. And my mother kept these in a box, never knowing what would happen in the future. She opened that box when I came home and said, “This is why you chose Heineken.” It’s quite a nice coincidence. That was 14 years ago.

How did your company start in the Netherlands?

It was 150 years ago, when a gentleman called Mr. Heineken bought an existing brewery and directly started to innovate by brewing beer. Ten years laster, he started the brewery and he launched the beer called Heineken. We use certain yeast that has been specifically developed for Heineken, and we still have that, which gives the distinctive taste.

Wherever in the world, we use that specific yeast. 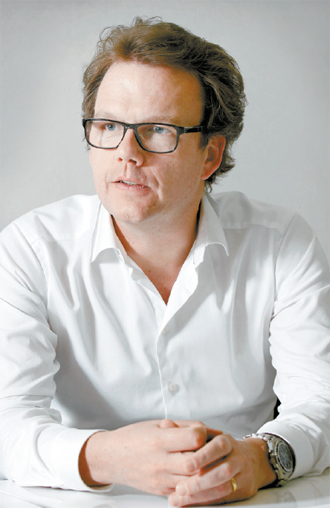