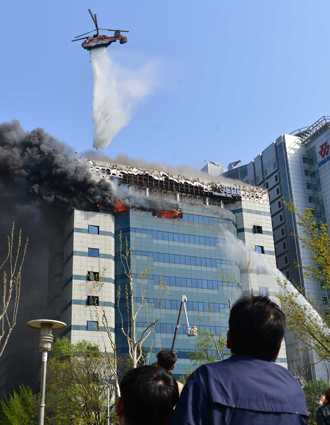 A fire broke out yesterday in one of the data centers of Samsung SDS, an IT company that manages the servers for affiliates of the Samsung Group, forcing the company to take steps to protect its data.

The fire started at 12:25 p.m. at the center located in Gwacheon, south of Seoul, and continued to burn the exterior of the 10-story building for hours, said an official of Gwacheon Fire Station, which handled the blaze.

There were no casualties reported except for one employee of a subcontractor who suffered a minor injury caused by debris, said the fire station official. The injury is not life-threatening and the employee received treatment at Hallym University Medical Center in Pyeongchon, near Gwacheon, the station said.

The cause of the fire had not been determined as of yesterday, but one media report said it originated in an electrical generator on the third floor. The company did not confirm the report, but no criminality is suspected.

The company believed the fire did not touch the data room, but in a pre-emptive measure began backing up the Gwacheon data to other company locations, said an official at Samsung SDS. Moving the data did cause some glitches at Samsung Card website.

The company has three other data centers around the country, and officials said all information has multiple backups.