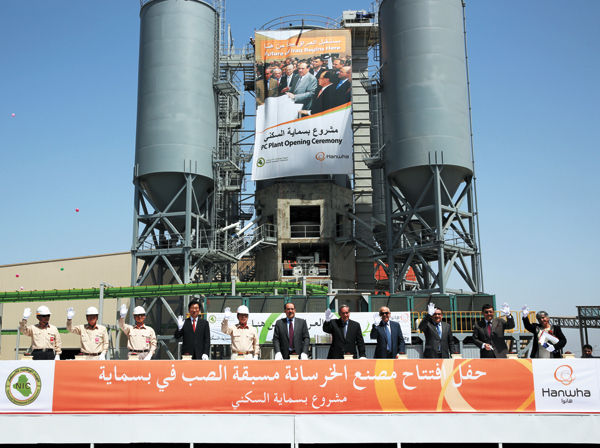 Hanwha E&C held a completion ceremony for its precast concrete plant - the largest in the world - in Iraq last Wednesday.

The plant will be used to create subsidiary materials needed for erecting a building, such as pillars, walls and beams, which will be put together later at the construction site.

This method is suitable for large-scale constructions because it allows stable production of high-quality building supplies in a shorter period compared to the traditional method that produces and assembles the building materials on site.

In a residential construction project in Libya, a Korean company used this method to reduce time while maintaining quality and saving expenses.

The completed precast concrete plant takes up 660,000 square meters (163 acres) of land and has three factories producing concrete materials such as interior and exterior walls and slabs.

The plant consumes 6,400 tons of concrete each day, enough to fill 430 ready mixed concrete trucks, to support the construction of Bismayah New City. Hanwha E&C won the $8 billion new city contract in May 2012 under the support of Hanwha Group Chairman Kim Seung-youn.

One-hundred Korean subcontractors and 1,500 Korean workers have been employed in Iraq. Annually, 550,000 jobs are expected to be generated from the project, which will also boost the shared growth of Hanwha E&C and cooperating companies. The overseas expansion of associated domestic companies that provide building materials, heavy equipment, information technology, logistics, harbor and plants is also anticipated.

Hanwha E&C hopes that the contract will become a model case for the Korean government’s creative economy initiative. The precast concrete plant is also expected to serve a crucial role in Iraq’s national housing program led by the NIC to provide homes for one million people.

The construction of the precast concrete plant went very smoothly. According to the executive director of Hanwha E&C, Moon Seok, the completion ceremony took place two months ahead of the originally planned date, thanks to the speedy process. “The capability of Hanwha E&C is impressive,” said Prime Minister Maliki. “We are planning to continue active support for the construction.”

Additional construction for the city infrastructure, worth $1.5 billion, is also under discussion. “It is the result of the Iraqi government’s trust toward Hanwha E&C and the Hanwha Chairman Kim,” said a Hanwha E&C official. “They value the competency Hanwha E&C has.”