Hanwha Eagles and LG Twins players confront each other after Twins pitcher Jung Chan-heon hit the Eagles’ Jung Keun-woo, at the Hanbat Sports Complex in Daejeon on Sunday. By Jung Si-jong

With a runner on third with one out and a full count in the bottom of sixth, the Hanwha Eagles led 7-5 against the LG Twins on Sunday. Jung Keun-woo of the Eagles was at bat and only one thing was on his mind - driving the runner in to give an insurance run for a winning series.

But his wish was not granted, and seconds later the seventh pitch delivered by the Twins’ right-handed reliever Jung Chan-heon reached 147 kilometers (91.3 miles) per hour and hit him in the back. He could do nothing but endure the pain with a look on his face that asked, “Hey, aren’t you going to apologize?” as he ran to first base. The atmosphere was a little tense, but Jung refrained from running to the mound because the pitcher didn’t hit him intentionally, given the score and the ball count.

Next to bat was Kim Tae-kyun. He hit a ground ball into Twins shortstop Oh Ji-hwan, and Jung made an aggressive slide for second base but was out. Kim survived at first, and the Eagles gained an 8-5 lead as the runner on third scored. But when the inning ended, the screen showed Twins outfielder Lee Byung-kyu complaining to Jung for his aggressive play that injured shortstop Oh who was on second. 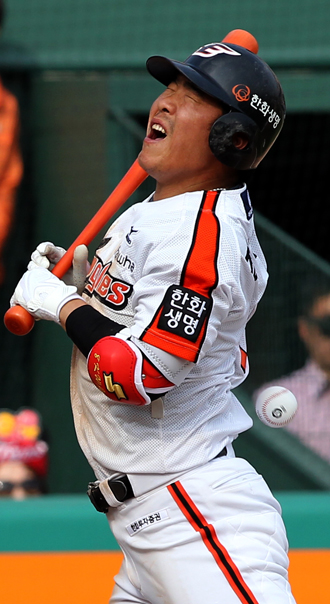 Jung Keun-woo reacts as he is hit in the back by a ball in the bottom of the sixth inning. By Jung Si-jong

The Twins later said they were angry in the dugout after they saw that Oh had suffered scratches on his right calf, was bleeding and had part of his uniform ripped.

But the ugliest moment of the game came when Jung was up to bat in the bottom of the eighth with one out. The Twins pitcher wasted no time and threw the ball straight into Jung’s left shoulder. Jung’s face turned scarlet as he walked to the mound, marking the first bench-clearing of the 2014 season in front of about 13,000 fans at the ball park. Players tussled a bit and yelled at each other, and the pitcher was ejected from the game. The Korea Baseball Organization yesterday handed Jung a 2 million won fine and a five-game suspension for throwing the bean ball.

But once the game was over, the bench clearing was blamed on the Twins. Analysts and fans said that the pitcher should have apologized to Jung when he hit him in the sixth, possibly a strange concept for foreigners who don’t know how Korean players behave after hitting someone. Players in foreign leagues generally don’t apologize during a professional ball game.

But in Korea, a pitcher expresses his regret, generally by taking his cap off to the hitter. The practice only exists in Korea, where there are nine teams and a culture of respecting those who are older and who have had a longer career in baseball. Many players once played on the same team, some when they were amateurs and some as members of the Korean national team at international events. Some foreign players who have seen these indications of respect in the past considered it a lack of professionalism, but it is common here. Jung is 32 years old and the pitcher, Jung Chan-heon, is 24.

Before the season began in a meeting at the Korea Professional Baseball Players’ Association office, captains and players representing clubs promised to abstain from throwing bean balls and not to intentionally create situations that could lead to bench-clearings, but the effort fell flat within three weeks of the season’s start.

“I can’t find words to defend the Twins,” said analyst Cha Myung-suk, who was a Twins pitching coach until last season.

“When I saw Jung sliding to second base, I found nothing wrong, and that was why the second base umpire didn’t call a foul on him. And I also don’t understand why shortstop Oh Ji-hwan just didn’t toss the ball to the second baseman to make a double play faster. He [Oh] took more than six steps to tag the second base and it eventually left a slow runner, Kim Tae-kyun, safe at the first base.”