Chaehwa, an ancient art in silk

Chaehwa, an ancient art in silk 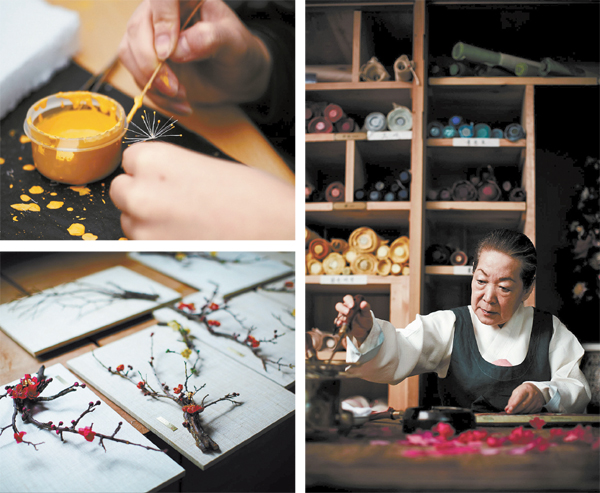 Hwang Su-ro, who has devoted her life to restoring the traditional culture of making royal chaehwa, says the spirit of making the silk flowers derives from the “respect for life.”

“Without picking live flowers, chaehwa can revive not only the form but also the smell [of real flowers], which symbolizes the respect and spirit of art,” said Hwang at a press conference on April 8.

Royal chaehwa are categorized into three types depending on how they are used: jamhwa for hair, sanghwa for banquet tables and junhwa for decorating banquet halls.

Using silk or ramie as primary materials, handcrafting each flower requires a very meticulous process. “In the case of a lotus, we have to fold the fabric for every crease in the flower and tie it with silk thread for about six months to get it fixed,” said Hwang.

“For the stamens, we use deer hair and apply it with real pollen mixed with honey,” she said. “During an outdoor exhibition in 2004 at Deoksu Palace, real bees and butterflies flew in and surprised us.”

Her latest exhibition at the National Palace Museum of Korea shows us how lavish the culture of chaehwa was during Joseon times (1392-1910). In the 30th year of Sunjo’s reign, his son, the crown prince Hyomyeong, held a banquet at Changgyeong Palace - first in the daytime with the King and the crown prince, then in the evening directed by the queen and the ladies of the royal court.

Based on “Uigwe,” or records of the royal ceremonies and rites, Hwang thoroughly recreated the silk flowers used in these banquets, working together with Han Bok-ryeo, the chairman of the Institute of Korean Royal Cuisine.

“In the case of an evening banquet, since it was for the ladies, you could see that the flowers used for it were much fancier and more delicate. It shows the quintessential sentiment of chaehwa,” said Hwang.