Bruno Legeron’s co-worker and artisan shows how to assemble silk flower petals made by Legeron into a complete flower, in a performance held at the hanok of Arumjigi Culture Keepers Foundation in Bukchon last week.

“Besides the fact that Korea cuts out the individual petals one by one by hand while we use metal casts, the basic methods of crafting the flowers are surprisingly similar,” said Bruno Legeron, the fourth generation to run the family business, at a demonstration of the delicate art held at the hanok, or traditional Korean house, of the Arumjigi Culture Keepers Foundation in Bukchon on Thursday.

During the workshop, the first flower to be created by Legeron was a camellia. With the precut pieces of fabric dyed violet, Legeron used irons of different sizes and his own hands to adroitly create the versatile “facial expressions” of the flower.

He infused a lot of curves and volume in the center to make the flower’s bud, and on the exterior he spread out the fabric to make the thin and delicate petals. He then wrapped the brazen wire with green fabric, which will act as the stem, and intricately glued the petals to it one by one.

As Legeron put on the finishing touch by pinning a brooch behind it, the audience burst out with applause. 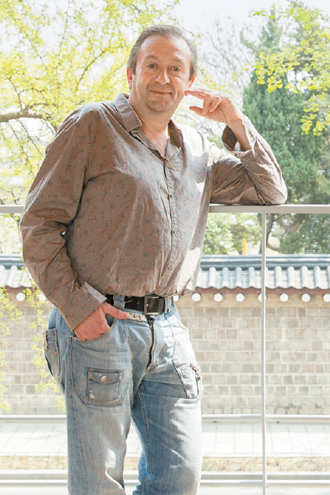 Bruno Legeron, great-grandson of the house of Legeron’s founder and its current head, poses near the National Palace Museum of Korea.

According to Legeron, the history of artificial flowers in Europe goes back to the Middle Ages, although it did not truly start to flourish until the 18th century.

Just like the chaehwa crafts that started during the Goryeo Dynasty (918-1392), which are now in danger of dying out, the imitation flower business in France is not doing so well. There used to be more than 100 workshops in the nation, but now there are just three, and of those companies, two recently merged with Chanel.

“In my grandfather’s generation, we used to have 40 artisans, but now the eight of us is all we have,” said Legeron.

However, even in this unpromising situation, he refuses to use machines for his work.

“It’s not about copying nature but about creating something from nature,” said Legeron.

“We never make the same design in bulk for unspecified individuals. We only make new models that have specific purposes. We’ve never made something that we had already made before.”

While maintaining the traditional tools and methods, he was confident that a vast number of designs would be possible with just varying the materials. “Bring anything from latex to leather,” Legeron said, “we can make our flowers out of anything.”

For instance, the high-fashion brand Hermes regularly orders a flower made out of their newly released scarfs.

“What should be noticed is that while Korea’s chaehwa is only for museums displays, the ones in France are everyday objects,” said Choi Sung-woo, head of the Ilmac Cultural Foundation.

“As an intangible cultural heritage, it is without doubt important for the craftsmanship to be passed down, but at the same time it needs to develop. That is how artisans maintain their living and also preserve the tradition.”