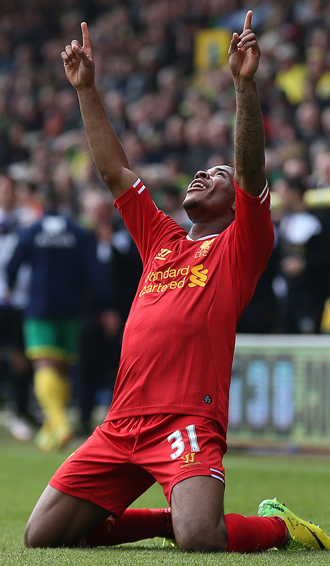 Raheem Sterling celebrates after he scores the third goal for Liverpool and his second goal of the match in his team’s 3-1 English Premier League victory over Norwich City on Sunday. [REUTERS/NEWS1]

Liverpool took a giant step toward its first title in 24 years with a 3-2 win at a plucky Norwich City on Sunday, opening up a five point lead over second-placed Chelsea with three matches remaining.

Two goals to Raheem Sterling and Luis Suarez’s 30th league strike of the season helped them to their 11th consecutive Premier League victory and ensured them a top four finish and qualification for next season’s Champions League, the first time they have reached Europe’s elite club competition since 2009-10.

They moved to 80 points, five ahead of Chelsea who suffered a shock 2-1 defeat by last-placed Sunderland on Saturday, while third-placed Manchester City, on 71 points and with two matches in hand, play West Bromwich Albion on Monday.

Norwich, which remains mired in the relegation battle in 17th place, two points above Cardiff City and Fulham and three ahead of Sunderland, failed to roll over for their higher placed opponents.

After Gary Hooper had scored for Norwich early in the second half, Robert Snodgrass’s 77th minute goal ensured a nervy finish for the visitors who had appeared to be heading for a comfortable win at 3-1 up.

Liverpool has not finished top since 1990, two years before the Premier League began, and they can put themselves on the brink of ending that drought when they meet Chelsea at Anfield next Sunday.

Suarez, who now has 12 league goals in five matches against Norwich, refused to get carried away with their position.

“In football you never know what can happen,” the Uruguayan told Sky Sports.

“We keep calm and focus on next game. Of course we are happy; at the start of the season our target was for the top four.”

Liverpool made a typically fast start at Carrow Road, with Sterling putting the Reds ahead after four minutes when he received the ball from Suarez, shifted right and unleashed a shot from outside the box that grazed Michael Turner, giving John Ruddy no chance.

Hooper headed over from close range, but with Liverpool’s constant movement creating plenty of openings it was little surprise when they doubled their advantage with 11 minutes gone.

Jon Flanagan released Sterling down the left, with the 19-year-old sending in a low cross that evaded the defense, allowing Suarez to open his body and place the ball inside the far post, becoming the first Liverpool player since Ian Rush in 1986-87 to score 30 league goals in a season.

To the credit Norwich, who have now lost four straight matches, they did not buckle, with Hooper being denied by Joe Allen and Nathan Redmond stinging the palms of Simon Mignolet.

The hosts continued to press after the break, with Hooper finding the back of the net early in the second half when Mignolet failed to deal with a high cross under pressure from Bradley Johnson, the ball falling to the former Celtic striker in front of an open goal for his first goal since late December.