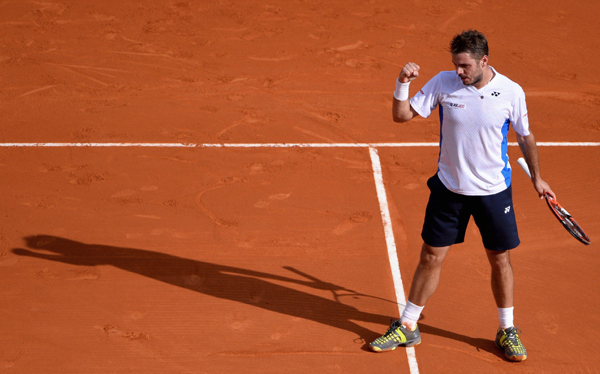 Stanislas Wawrinka of Switzerland reacts during his final tennis match against his compatriot Roger Federer at the Monte Carlo Masters in Monaco on Sunday. [REUTERS/NEWS1]

Third seed Wawrinka recovered from the loss of the opening set to claim his maiden Masters title on the Monte Carlo clay just six weeks before the May 25 to June 8 grand slam tournament in Paris.

“I can see that when mentally I’m there and I’m fighting, I can play tennis, I can beat all the players,” Wawrinka told reporters.

“When I came here, for me it was more like a test. I knew I was playing good tennis, but I didn’t expect to win because the draw was so strong.

Federer, whose only defeat in 14 previous matches against Wawrinka was in Monte Carlo in 2009, said: “I had a great week. Congratulations to Stan, I hope it will continue for you like that for years.”

Fourth seed Federer, who beat an injured Novak Djokovic in the semi-finals, was his brilliant old self for almost an hour but the 17-times grand slam champion was eventually overwhelmed by his opponent’s power.

Wawrinka played with great depth as Federer was eventually pushed back far from his baseline and was prevented from attacking.

“I don’t think I served quite so well early on in the third set,” Federer said.

“I think he really found his range and started to hit bigger, deeper. He didn’t miss that many second serve returns anymore.

“He gave me a couple cheap points in the first couple sets which he later on really didn’t give me anymore.”

Federer saved a break point in the fourth game, Wawrinka banging his racket on his head in frustration after his passing shot went long.

Another long backhand from Wawrinka gave Federer the opening set after 42 minutes.

Wawrinka opened a 2-0 lead in the second set, only for his opponent to steal his serve straight back with a stunning backhand down the line.

Federer saved more break points in the fourth game, including one with a superb forehand winner as the second set went to a tiebreak.

Federer saved two set points before Wawrinka finished it off with a smash.

Wawrinka broke in the first game of the decider with a forehand winner down the line as Federer looked disorientated.

Federer went to the net to save another break point at 2-0, but a crosscourt forehand earned Wawrinka a second break and a 3-0 lead.

He followed up on serve and Federer never threatened a comeback, bowing out following yet another forehand winner by Wawrinka.