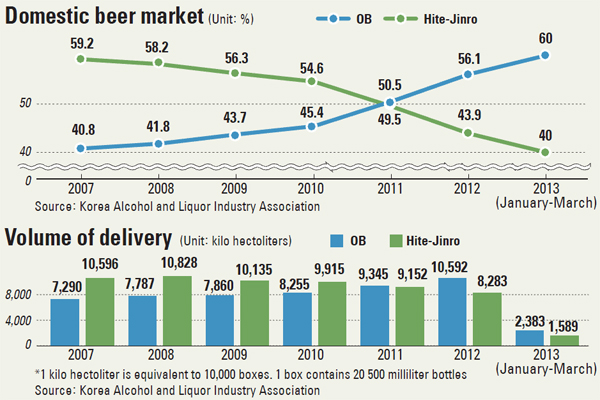 Beer lovers, get ready to fill your glasses with the taste of new domestic ales and lagers - not just with Cass and Max. With the release of Lotte Liquor’s Kloud beer today, competition is expected to become fiercer in the market for local beer, which is dominated by Oriental Brewery and Hite-Jinro.

According to the Korea Alcohol and Liquor Industry Association, OB controls 60 percent of the domestic beer market, and Hite-Jinro has a 40 percent share. The two are the champions of the market, with their Cass, Max and Hite lagers. But a thirst has been growing among consumers for more variety in their beer.

“One of my joys in life is drinking fresh, cold beer after work,” said Ms. Suh, an office worker based in southern Seoul. “My favorites are mostly imported beer like Asahi. Although they are more expensive than local beer, they taste better, at least to me.”

Industry sources say complaints have been growing that the local beer market has become stagnant. In 2012, The Economist published an article describing Korean beer as “boring.”

“Local brews such as Cass and Hite go down easily enough,” it said. “Yet, they leave little impression on the palate .?.?. The problem for Korean boozers is that their national market is a cramped duopoly.”

With Lotte joining in, there are hopes for change.

“Lotte has a strong retail channel,” said an official from a rival brewery. “Although it means more competition, it’s good for the whole beer industry in Korea, which has been perceived as lacking diversity.”

Ahead of Lotte Liquor’s launch of its new Kloud beer today, OB has started selling its own ale-type beer, called Alestone while Hite-Jinro has started producing Queen’s Ale.

“Based on our previous surveys, consumers are dissatisfied with the tastes of domestic beer and there is a growing demand for more diversity,” said a spokesperson for Lotte Liquor.

To produce Kloud, Lotte chose to use the original gravity method, meaning water is not added to the fermented solution of raw material, leaving a rich foam and taste.

A growing number of craft beers are adding to the domestic competition. Currently, there are around 34 craft brewers, according to the Korea Microbrewery Association, but they expect that number to grow to as many as0 in the years to come.

“There has been a change in the local liquor tax law earlier this year and for small house beer manufacturers, the rate of tax per liter has been reduced to 60 percent from 80 percent,” said an official from the association. “This would increase the number of small house brewers offering a variety of taste to consumers.”