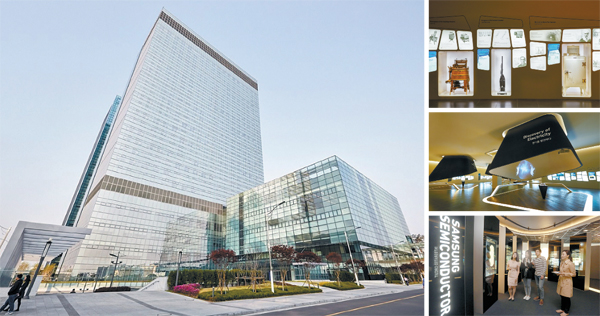 Samsung Innovation Museum, above on the right, is a five-story building that sits next to R5, a research institute of Samsung Electronics within Samsung Digital City in Suwon, Gyeonggi. The museum opened yesterday, with the aim of exploring the past, present and future of the world’s electronics industry. Right, from top to bottom: The home appliance area of Exhibition Hall 1; the cone-shaped roof at the electricity area of Exhibition Hall 1; and a semiconductor zone in Exhibition Hall 2. Provided by the company

From Thomas Edison’s light bulb and Samuel Morse’s telegraph to the latest cutting-edge electronic products, many of the inventions that have shaped the history of information and telecommunications are now accessible at one venue in Korea.

The Samsung Innovation Museum, or S/I/M, which features the past, present and future of the world’s electronics industry, opened yesterday at Samsung Digital City in Suwon, according to Samsung Electronics.

The museum chronicles the history of electronics, including Edison, Michael Faraday and Alexander Graham Bell, with a glimpse into innovations to come in the future. Many IT companies around the world have museums for their own products, but few have built a museum to look at the IT industry as a whole, Samsung Electronics said.

“The Samsung Innovation Museum brings together some of the true historical masterpieces of electronics innovation,” said Kwon Oh-hyun, vice chairman and CEO of the world’s largest maker of smartphones, TVs and memory chips, at the official opening ceremony held at the five-story museum. “These inventions laid the technological foundation that allowed us to develop and refine the products that enhance lives today.

“The museum gives visitors an opportunity to see where we’ve come from and also to see where Samsung draws inspiration from to continue to create category-defining products.”

The museum, which covers 10,950 square meters (2.7 acres) in total, is divided into three exhibition halls plus a history hall. More than 150 historical items are showcased in the first two halls, while the third hall exhibits current and future innovations.

Exhibition Hall 1, dubbed “The Age of Inventors,” tells the story of the dawn of the electronics industry between the 18th and 20th centuries.

It displays original models of many breakthrough innovations, including Guglielmo Marconi’s wireless telegraph “Maggie,” produced in 1896, Edison’s early filament lamp from 1900, Maytag electric washing machine No. 45 from 1911 and the GE Monitor-Top Refrigerator from 1929.

Exhibition Hall 2, “The Age of Industry Innovation,” consists of three zones that provide insight into the key pillars that underpin the electronics industry: semiconductors, displays and mobile. It features technological landmarks, such as the invention of the transistor, the development of integrated circuits, the history of the semiconductor and the evolution of display technology.

The mobile zone features the world’s first mobile phone as well as the world’s first smartphone. “There are also examples of how Samsung’s innovations in telecommunications have benefited those around the world, such as the time when Samsung loaded a GT-i7410 projector phone with encouraging messages and video clips to boost the morale of the 33 Chilean miners trapped underground for 69 days in 2010,” said the company in a statement.

Many of the products developed by Samsung are showcased in the second hall. Also exhibited there are products by other leading IT companies such as Intel, Sony, Sharp, Nokia and Motorola.

The hall also has an education facility, called S/I/M lab, where children can learn about semiconductors, displays and mobile communications.

Exhibition Hall 3, going under the title “The Age of Creation,” showcases the company’s vision for the future, displaying its most advanced technologies. This hall is divided into three areas: The S/I/M Theater, the Product Gallery and the Samsung nanum gallery.

Samsung History Hall, located on the first floor of the museum, features Samsung’s history of innovation. The company’s corporate philosophy is also introduced, including the “New Management” initiative by the company’s Chairman Lee Kun-hee in 1993.

The museum is open from Monday to Saturday. Reservations are required weekdays but not Saturdays.