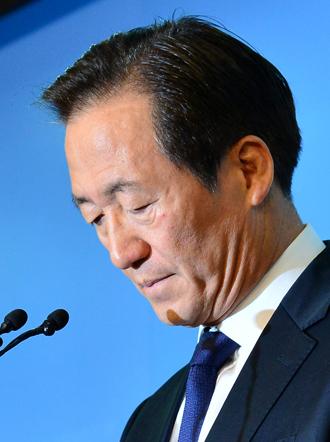 Emotions are running so high across Korea about the Sewol ferry tragedy that a string of high-profile figures have been pilloried for making light of it or otherwise doing inappropriate things, like having a foolish son or eating ramen in a chair.

The youngest son of Chung Mong-joon, a seven-term lawmaker with the ruling Saenuri Party and one of the frontrunners in the race for the Seoul mayoralty in June, stirred an enormous public uproar yesterday with a posting on Facebook on Friday that used the reaction to the tragedy to insult the entire nation.

“Unlike people in other countries who cope with disasters rationally, Korean people shout out loud and swear in the face of the president, who pledged to do her best with rescue efforts, and they even poured water on the prime minister,” wrote the 18-year-old, who graduated from high school two months earlier.

“It makes no sense to expect the president to become a God-like being and fulfill every need of the people when the national psyche is extremely uncivilized. People gather to form a nation, and this nation is uncivilized because the people are uncivilized.”

As the post spread across the Internet with furious speed, Representative Chung, sixth son of Hyundai founder Ju-yung, a multi-billionaire and a former presidential candidate, made a very fast and groveling apology via social networking services. As the scandal threatened his standing as the strongest Seoul mayoral candidate, he was quick to follow up with a press conference.

“Dear families of the deceased and missing and all Koreans, I apologize from the bottom of my heart,” the apology on Twitter and Facebook reads. “I am indescribably sorry for the thoughtless action my son committed. He regrets his wrongdoing, but I should take each and every blame.”

Song Young-chul, an official with the Ministry of Security and Public Administration who accompanied Lee Ju-yung, minister of oceans and fisheries, found his head on the chopping block after he was seen Sunday attempting to take a group photo with his colleagues in front of the situation room installed for the families of the missing at the port in Jindo, South Jeolla. It was the spot at which they waited to check if the corpses arriving from the sea were their own missing loved ones.

The already indignant crowd on the scene was thrown into a frenzy and it physically blocked both Song and Lee from leaving the spot.

“Does this look like something you can celebrate when we are in complete suspense?” said one angry relative.

That commotion led Song to tender his resignation and the Blue House announced yesterday it accepted it.

Seo Nam-soo, minister of education, was photographed Wednesday, the day of the accident, eating instant ramen while seated in a chair in the gym in Jindo, South Jeolla, in which anxious relatives are living.

That wouldn’t seem such a serious crime, but many of the relatives have been seen lying on the gym’s floor, so Seo was criticized on the Internet for being an arrogant top-ranking government official.

Some actions that may have been appreciated in ordinary circumstances were made into an issue.

Gyeonggi Governor Kim Moon-soo was pummeled in cyberspace after posting on Twitter four poems lamenting the difficulty of rescue operations and death of the victims a day after the Sewol capsized. Other Twitter users sarcastically responded by asking whether he was in his right mind when there are so many still missing. Many challenged the genuineness of his emotion.

Kim, who has said he would run for the presidency in the 2017 election, apologized later via Twitter, saying, “It is such a shame that I caused a misunderstanding. I will do my best to provide support.”

The city of Ansan, where the 11th graders traveling on the Sewol studied, is in Gyeonggi.