Park lashes out at poor management of sinking

Park lashes out at poor management of sinking 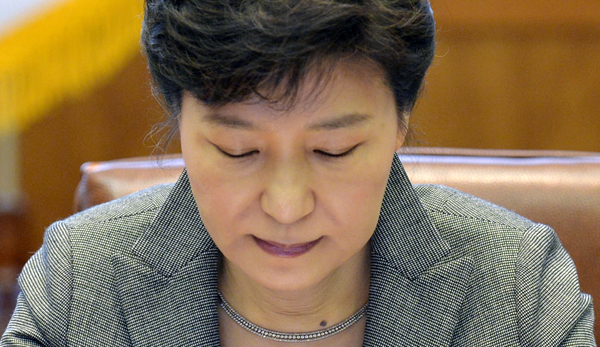 “Those who caused the accident after violating the law or regulations and ignoring the manuals, and anyone who breached duties as the ship sank, as well as those who forfeited their responsibilities and connived in illegalities,” she said in a meeting with her senior secretaries yesterday morning, “all who are deemed responsible will be held strictly liable - both criminally and under civil law - regardless of their positions.”

The biweekly meeting between the president and her senior secretaries was devoted entirely to the capsizing of the ferry in the waters off Jindo, South Jeolla, on the morning of April 16.

An angry president reprimanded civil servants blamed by families of the hundreds of missing passengers - the majority being 11th graders from a high school in Ansan, Gyeonggi - for a slow, clumsy and totally ineffective response to the crisis.

“I met with the families of the missing people at the scene and their distrust of government officials was enormous,” Park said.

“Civil servants exist for the nation and the people, and those who merely walk on eggshells trying to preserve their positions, leading the people to distrust even the devoted workers, will definitely be expelled under this administration.”

The president went so far as to compare the captain of the Sewol, and other crew members who deserted the passengers to save their own lives, to murderers.

“The behavior of the captain and some crew members is beyond understanding and is no better than homicide, which is unacceptable,” Park said. “Right after the accident, the captain did not follow the orders from the Jindo Vessel Traffic Service to evacuate the passengers and escape the ship, leaving the passengers behind. This is utterly beyond imagination - both legally and ethically.”

Admitting that there are serious questions about the ship to be answered - about the acquisition of the vessel from Japan, approvals for its operation and its safety check procedure - Park stressed the importance of a thorough investigation.

She said the accident occurred just nine days after she reminded her chief secretaries of the importance of carrying out procedures listed in the state’s crisis manuals.

“However detailed and good the manuals are, if the people on duty do not have an in-depth knowledge of their content, they may as well not exist,” she said during the meeting.

“People on duty should thoroughly understand the manuals and see if the manuals work in an actual crisis situation.”

Currently the government has a combined 29 manuals - 14 devoted to national security and 15 about disasters. The manuals state how each government ministry and institution should cope with a crisis situation.

Last year, the Park administration updated disaster manuals from the Lee Myung-bak administration. A key change was to designate a central command for disaster control. The underlying concept is the idea that a person or institution who has the best knowledge of a disaster scene should be granted full authority to ask for support from various sectors both in terms of human resources and materials.

The reform was sparked by a hydrofluoric acid gas leak at a chemical plant in Gumi, North Gyeongsang, last September that killed five people and sent more than 2,000 to the hospital.

“The biggest loophole in the Sewol accident was that central command was not properly designated, leading to complete incoherence,” said one of the figures who was involved in composing the manuals under the Lee administration. “Under the manuals, the person who has the best knowledge of the scene is supposed to be designated as commander in chief. But the reality was different.”

The manuals were useless at the initial stage of the Sewol disaster. The fire defense headquarters for South Jeolla received the first distress call at 8:52 a.m. on April 16, and it was at 9:25 a.m. that Minister of Security and Public Administration Kang Byung-kyu, who was on a business trip outside of Seoul at the time, was told of the accident. Six minutes later an official with the ministry notified the head of the crisis management center under the National Security Council (NSC) of the Blue House.

That triggered the launch of a Central Disaster and Safety Countermeasures Headquarters under the Public Administration Ministry at 9:45 a.m.

President Park probably became aware of the disaster between 9:31 a.m. and 9:45 a.m. after a report from Kim Jang-soo, the NSC’s chief.

In a nutshell, it took 53 minutes from the initial report of the accident to mobilizing the Central Disaster and Safety Countermeasures Headquarters. Min Kyung-wook, a Blue House spokesman, gave the first press briefing on the accident at 10:30 a.m.

Under the manuals, Minister Kang should have appointed a central command, or a commander in chief, as soon as possible. He didn’t, which led to snowballing chaos.

The misinformation continued to be reported. The central disaster headquarters said it secured entry into the vessel for rescue workers at 10:05 a.m. on Friday but reversed the announcement at 3:28 p.m., admitting failure in the attempt.

The Coast Guard denied the headquarters’ assertion and said divers were “injecting oxygen, not entering into the ship.”

“All the confusion originated from the fact that the Coast Guard is at the scene, whereas the minister and deputy minister of public administration were at disaster headquarters in central Seoul,” said one government official who was previously in disaster relief operations.