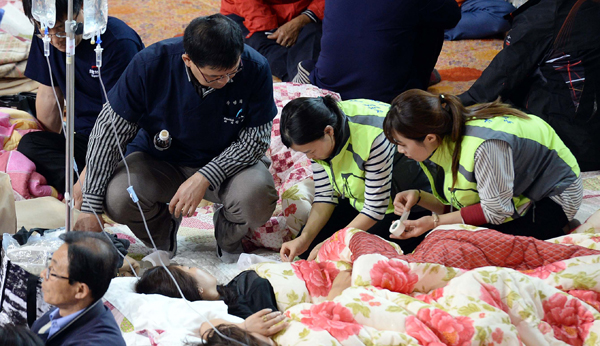 Medical volunteers administer an IV to a collapsed woman yesterday in the Jindo gymnasium where family members of the missing are camped out. Some relatives appear to be exhausted on the sixth day of the tragedy. [NEWSIS]

JINDO, South Jeolla - “Oh no! My baby!” cried a woman in a white tent set up in Paengmok Harbor at around 10 a.m. yesterday.

The woman, accompanied by other members of her family, had entered the makeshift tent to see if the remains of a female Danwon High School student was the young relative they have been looking for since the Sewol ferry capsized last Wednesday.

The cries of the woman filled the tent set up for the identification process. The accompanying relatives sobbed and shouted uncontrollably.

Press crews outside the tent dared not look inside. It was hard to tell which distraught people to be sorrier for: the woman and the relatives who made a positive confirmation or the family that left the same tent a few minutes earlier shaking their heads. They also wondered whether the girl was their loved one.

Nonetheless, they looked shaky as they returned, with tears in their eyes, to the gymnasium in Jindo that has been their home for the past few wretched days and nights.

It was just minutes before 10 a.m. when a Navy vessel made its way to anchor at Paengmok Harbor in Jindo, South Jeolla. Camped out at the pier was a long line of camera crews ready to shoot whatever was about to come out of the vessel.

A few minutes later, rescuers carried out two bodies covered with white sheets on stretchers. No one dared to speak. The only sound was camera shutters and a few low moans from reporters.

The two bodies were among seven found inside the sunken ferry yesterday as of 7 p.m. by the search and rescue workers, raising the death toll to 69 on the sixth day of the tragedy.

That still leaves 233 missing people and an increasing number of relatives coming to wait at Paengmok Harbor, a 30-minute ride from a gymnasium in Jindo for any word from the authorities. There are now more than 600 relatives camped out in the gym.

“I have no more tears to shed,” said Lee Hye-sook, 43, the mother of a Dawon High School student who is unaccounted for. “I just want to wash my son’s face before I say goodbye.”

At the port, anger and frustration with the authorities for what was perceived as foot-dragging in the rescue operation in the first few days, aggravated by a series of government blunders in the handling of the crisis, has given way to resignation and a wish by the families that they will at least get to see the bodies of their missing loved ones one last time.

The capsizing of the 460-foot-long ferry carrying 476 passengers last Wednesday is likely to be the country’s worst maritime disaster in decades.

Only 174 people on the boat were rescued, all on Wednesday, and that included the captain and 22 other members of the crew, who are thought to have abandoned the ship and its passengers prematurely. Since Wednesday, the rescue authorities have failed to find a single survivor trapped inside the five-story vessel.

If located in air pockets of a sunken ship, people can survive up to 72 hours, experts say. On the sixth day of frantic but seemingly futile efforts to find survivors, distraught families camped out in the Jindo gym braced themselves for losses. Some relatives stared at descriptions of bodies posted on a wall inside the gym.

One post described a victim as a female 162 centimeters (5 foot, 3 inches) in height, wearing a long-sleeve shirt and Adidas pants.

Identification for that victim was not found on the remains. The posting said the body was scheduled to arrive at Paengmok Harbor at 9:30 a.m. She was one of the two bodies brought ashore yesterday morning.

Some of the families at the gym are now bringing up the idea of raising the ill-fated ferry, a proposal the authorities previously rejected because it would reduce the chances of survival for anyone trapped inside.

“I gave up [seeing my daughter alive] when the ship sank completely,” said one father, whose daughter was among the 325 students from Danwon High School in Ansan. “The air pockets are now gone by now. We need to raise the ferry while the bodies are still intact.”

After first entering the capsized ferry Friday afternoon, the rescue team succeeded in bringing out more than 20 bodies.

At 5:51 a.m. yesterday, divers made their way to a dining hall on the third floor of the ferry. It’s expected that many students were in the dining hall eating breakfast at the time of the capsizing. Divers explored the third and fourth floors of the ship yesterday.

Since Sunday, the authorities have been in full rescue mode day and night as Sunday started a six-day period in which underwater currents will weaken.