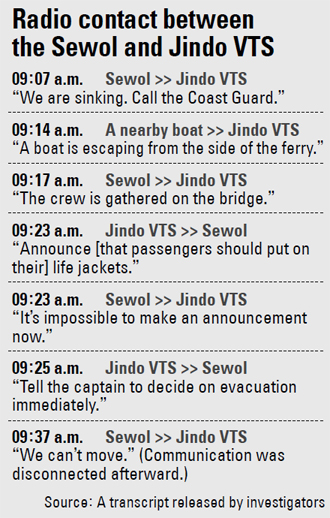 Several crew members aboard the Sewol ferry gathered on the vessel’s bridge to wait for rescue workers, taking few measures to evacuate the passengers in their capsizing boat, a transcript of the radio messages between the staff and the Jeju and Jindo maritime traffic services has revealed.

Later, when lifeboats arrived, the crew apparently abandoned the vessel and were among the first to be saved.

The excerpts, released Sunday by a joint investigation team of prosecutors and police, shed light on the staff’s negligence and lack of communication after the ferry began to list and then capsize, which authorities believe contributed to confusion among passengers and ultimately the loss of life.

They also provide a glimpse into the tense situation on the bridge on Wednesday morning after the 6,825-ton ferry, carrying 476 passengers, started to go down.

As of 8 p.m. yesterday, the total death toll stood at 69 and 233 people were still unaccounted for, many of whom are 11th-grade students from Danwon High School, who were traveling to Jeju Island for a school trip.

The messages released were mostly between 8:58 a.m., when the Jeju Vessel Traffic Service (VTS), under the Korea Coast Guard, confirmed the first distress call from the captain, and 9:38 a.m., when communication was cut off with authorities.

At 9 a.m., Jeju VTS messaged the ferry, “Please check your life jackets and prepare for evacuation if necessary.” But rather than follow authorities’ orders, the crew made an announcement to passengers, “Please do not move from where you are.”

That message was repeated six more times, according to survivors.

According to the transcripts, the ferry’s crew put in its first distress call at 8:55 a.m. to the Jeju VTS, rather than the unit in Jindo, which was closer to the scene of the accident. The vessel only began communicating with Jindo at 9:07 a.m.

At 9:17 a.m., according to the recordings, an unidentified crew member messaged the Jindo VTS, also under the Coast Guard, and said that “crews are gathering on the bridge now, and we can’t move.”

Under ferry rescue guidelines by Chonghaejin Marine Co. Ltd., the boat’s operator, the crew must keep their positions in an emergency situation to help passengers evacuate though the transcript indicates that they were on the bridge, located on the top of the ship, at the time.

“Don’t hesitate now,” it said, “put them [the passengers] in float tubes and pull them out of the ferry! Hurry!”

At 9:25 a.m., Jindo VTS added, “Because we don’t know exactly what’s going on there, we are asking the captain to make the final decision on evacuation immediately.”

The crew member on the other end apparently did not confirm to the Coast Guard whether they had evacuated passengers, only asking, “Can you rescue us if we flee now? .?.?. Have the lifeboats arrived here?”

At 9:38 a.m., the bridge cut off the communication, only stating, “Several people are attempting to flee on the left deck. The ship is tilted about 60 degrees to the side.”

The crew member who communicated with the Coast Guard was confirmed to be a senior sailor, according to the investigators. But it was not confirmed whether the captain participated in the communication or whether he was on the bridge at the time.

According to police, the rescued crew members said that all 46 of the lifeboats prepared on the ferry did not work.

But in the transcript, the Jindo VTS said at 9:14 a.m., citing a fisherman on a boat nearby, “A boat is escaping from the side [of the ferry].”

As of yesterday evening, 23 out of 29 crew members had been rescued, and all of the 15 full-time, regular workers were saved.

Investigators assume their survival was in part because they all had handheld transceivers to communicate with the bridge.

“I ordered the announcement to stay in the cabin before the lifeboats of the Coast Guard arrived,” the captain, Lee Jun-seok, 69, told reporters before he was jailed on Saturday. “After that, I definitely ordered the passengers to leave the vessel.”

However, the first mate, surnamed Gang, who was in charge of making the announcement, said he was never told to make such a broadcast before 10 a.m.

Gang told police that he stayed in a room separate from the bridge while other crew members were assumed to have fled around 9:40 a.m., including the captain.

“Until 9:40 a.m. when the vessel swiftly turned to the side, I received the radio message [from the bridge], but there was no order to flee,” he said. “At around 10 a.m., I attempted to flee by myself after water leaked into the broadcasting equipment.”

Gang said he passed out after nearly drowning and was swept away from the ferry by raging waters. He was rescued by the Coast Guard.

Lee, the captain, told reporters on Saturday that he could not order evacuation, as no life boats had approached the ferry.

But according to the transcript, at 9:15 a.m., there was at least one fishing boat near the ferry. An unidentified fishing boat messaged the Coast Guard at 9:14 a.m., stating: “We will rescue passengers if they flee from the ship.”

The Myeongin Star, a nearly 10-ton fishing boat, was reported of the sinking at 9:03 a.m.

while working in nearby waters. The captain, Park Yeong-seop, 56, rescued 27 passengers floating near the ferry along with the Coast Guard at around 10:30 a.m.

The Sewol’s captain came under fire again yesterday after a 2010 interview between him and a local broadcaster was aired on JTBC, in which he promoted the ferry he was operating at the time, which prompted outrage in the aftermath of the disaster.

In 2010, Lee appeared on OBS, a broadcast station based in Incheon and Gyeonggi, while operating the vessel, on which he was quoted as saying, “If you follow the directions of our crew members, our ship is safer than any other [means of] transportation. People using our ferry between Incheon and Jeju are safe.”

Yesterday, in response to mounting concerns since the accident among parents over group travel for students, the Ministry of Education announced that it had ordered schools nationwide to “infinitely postpone plans for any group tours.”

Officials said some schools had wanted to cancel their travel plans but couldn’t due to huge fees charged by travel agencies. The charges for delaying travel are cheaper than cancellation fees, according to the Ministry of Education.