A year after bombing, a marathon for the ages

A year after bombing, a marathon for the ages 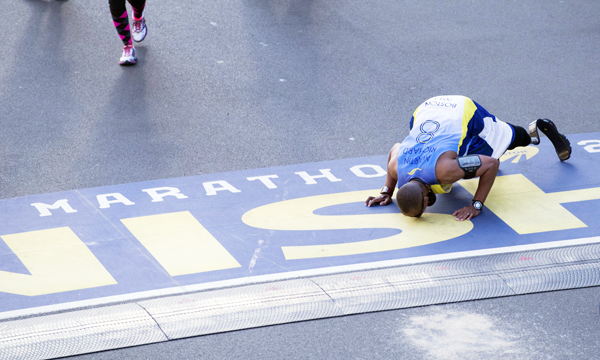 Cedric King, who lost his legs to an IED in Afghanistan, kisses the Boston Marathon finish line on Monday after running with the MR8 team, named for the youngest victim in the Boston Marathon Bombing, Martin Richard. Meb Keflezighi was the first American winner since Greg Meyer in 1983.[REUTERS/NEWS1]

American runner Meb Keflezighi said memories of the victims of last year’s bomb attack carried him through the last, difficult miles of this year’s Boston Marathon.

The Californian shocked observers on Monday by becoming the first American man since 1983 to win the world-renowned race, over a field of younger East African favorites.

“This is probably the most meaningful victory for an American, just because of what happened here last year,” the 38-year-old said shortly after breaking the tape.

“Those four victims, we can’t get them back, and those people who were injured, by the same token, I wanted to use their energy to win it,” said Keflezighi, who ran with the names of three bombing victims and a university police officer who authorities say was shot dead by the bombers three days later, written on his race number in marker.

Keflezighi covered the race’s hilly 26.2 miles (42.2. kilometers) in a personal best time of two hours, eight minutes and 37 seconds, narrowly defeating Kenyan Wilson Chebet, 28, who nipped at his heels during the final miles.

Keflezighi’s approach to the race was risky. He broke off from the pack early, leaving himself vulnerable to the brutal uphills just outside Boston’s city limits.

Keflezighi left his native Eritrea with his family when he was 12 years old, fleeing a war and a life of poverty and settling in Southern California.

When he arrived in the United States, he discovered running and over the years became one of America’s best distance runners.

Among his biggest accomplishments, Keflezighi won the marathon silver medal for the United States at the 2004 Olympics in Athens, and in 2009 became the first American to win the New York Marathon in 27 years.

He withdrew from the Boston Marathon last year due to an injury but attended the race as a spectator. He was nearby when twin pressure-cooker bombs ripped through the crowd at the finish line, killing three people and injuring more than 260.

“We were helpless, we just started crying,” Keflezighi said of the moments after the bombing. “I cried today, too, but this time it was tears of joy.”

Keflezighi said he met with the father of 8-year-old bomb victim Martin Richard in the days before the race.