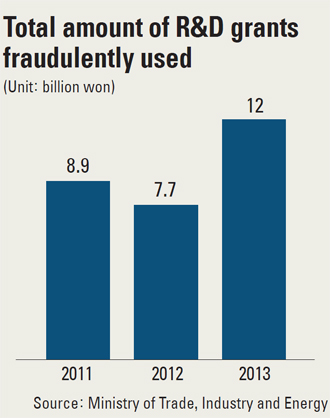 The government wants to strengthen punishment of private companies and research institutions that divert research and development funds for non-R&D use.

The Ministry of Trade, Industry and Energy yesterday announced it has submitted a bill that would impose fines of up to five times the amount of R&D grants, in addition to repayment of the initial grant.

The new punishment could take effect as soon as late July.

The move is part of the ministry’s plan announced at the beginning of the year to normalize operations and reduce budget waste through a government-wide effort to end lax management. It applies only to those researchers who get grants from the ministry.

“The policy aims to form a healthy R&D fund culture throughout the research community,” said Cha Dong-hyung, director general for industrial technology policy at the ministry. “At the same time, we will keep changing the legislation to reflect field opinions from researchers.”

So far, the government has punished some fraudulent grant recipients by having them repay the initial amount.

Because punishment was not mandatory, the ministry saw a 34 percent increase in fraudulent use to 12 billion won ($11.6 million) last year.

In particular, the ministry discovered number of cases and size of fraud picking up last year, recording 64 cases involving about 12 billion won of government money. It was about 38 percent of the ministry’s total of 3.15 trillion won in R&D spending last year.

Some individual researchers also were involved.

They submitted fake receipts to the ministry. The companies even took back salaries from bank accounts of junior researchers they had hired after filing reports to the government.

An R&D industry analyst said the industry acknowledges the need for punishment of any fraudulent research groups, which oftentimes are private companies, but the size of the fine sounds intimidating, which may lead honest researchers to refrain from applying for government grants.

“A fine five times larger than the initial grant amount sounds a little heavy,” said Lee Min-hyung, a research fellow from the Science and Technology Policy Institute. “If the government wants to make the punishment that severe, it will have to come up with clear set of criteria to distinguish between legal and illegal use of grant money.”