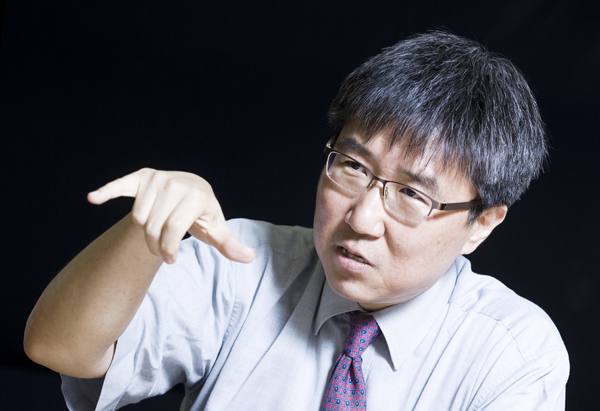 Chang Ha-joon teaches economics at Cambridge University and is the author of popular books about economics such as “Kicking Away the Ladder” and “Bad Samaritans.” His new book, “Economics: The User’s Guide,” will be released on May 1 in the United Kingdom. He is also a columnist for the Joongang Ilbo.

Chang spoke with The WorldPost South Korea editor and former The Oxford Union President Lee Seung-yoon last month. This is an excerpt of their talk:

Q. What made you decide to write an introductory book on economics?

A. People have very strong opinions everything - gay marriage, global warming and the Iraq war - without necessarily having the right educational background. When it comes to economic issues, people suddenly become very diffident. But why? Economics is only as difficult or easy as climate science. Economists have been fantastically successful in persuading the public that what they do is so difficult that ordinary people can’t understand it even if they try. So in this book I’m trying to tell you that economics can be understood if you simply invest a few days’ time in it.

You often say, “economics is a political argument.” How did you come to this conclusion?

The point I was trying to make when I said that in my current book and my earlier works is basically to debunk this widespread view, propagated by the current generation of economists, that somehow you can neatly separate economics from politics. They say, “This is the area of the market, and no political logic should intrude.” But actually, what you count as a political logic or market logic partly depends on your economic theory.

But more importantly, all markets are in the end politically constructed. A lot of things that we cannot buy and sell in markets used to be totally legal objects of market exchange - human beings when we had slavery, child labour, human organs and so on. There is no economic theory that actually says that you shouldn’t have slavery or child labour because all these are political, ethical judgments.

One of many things that sets your book apart from others is that you devote a whole chapter to different schools of thoughts in economics. Can you tell us why?

I’m sure it’s similar in many other fields, but, especially in economics, there is no single economic theory that can explain everything. To make that point, I talk about Singapore in the book. If you read the standard account of Singapore’s economic success in The Economist, The Wall Street Journal or some textbook, you only learn about Singapore’s free trade and welcoming attitude towards foreign investment. But you will never be told that all the land in Singapore is owned by the government, and 85 percent of housing is supplied by the own housing corporation. Or that 22 percent of the GDP is produced by state-owned enterprises (including Singapore Airlines), when the world average in that respect is only about 9 percent.

So I challenge my students to tell me one economic theory - neoclassical or Marxist or whatever, that can explain Singapore’s success. There is no such theory because Singaporean reality combines extreme elements of capitalism and socialism. The point that I’m trying to make as an example is that all theories are partial. The classical school or Marxist school focuses more on production than exchanges, in contrast to the neoclassical school. They make different assumptions, and they are interested in different issues. They all have their weakness and strengths. In recognition of the fact that the real world is very complex, we need to teach our students that there are different ways of understanding the economy.

Can you blame economists for the 2008 financial crisis?

You can and should blame economists, but they are, of course, not the only people who made this mess. All those financiers who invented and traded dubious products without providing full transparency and cheated the regulators, they should be blamed as well. The regulators believed that the market more or less regulates itself and thought that all they have to do is to capture swindlers. So a lot of people are to blame, even down to people who took up mortgage loans without fully understanding them. So what about economists? Well, they are the ones who justified what was going on. Robert Lucas, the 1995 winner of the Nobel Prize in economics, even declared that the “problem of depression prevention has been solved.” Most of them thought that way. At the least, they gave people a false sense of security. What is even worse is they were actively selling that story. If you watch documentaries like “Inside Job,” some of them were paid handsome amounts of money to say these things. There is this famous finance professor at Columbia who, several months before the Icelandic banking system collapsed, produced a paper saying that Iceland might be going through a bit of difficult stage, but it is a model for the rest of the world and so on. Later it turned out that he was being paid quite a large amount of money by the Icelandic Chamber of Commerce. I’m not saying that most [economists] do this for mone,y but they did propagate a theory that was basically soothing to everyone: There is no bubble, everyone is rational, markets are rarely wrong, and so on.

With the rise of China, some argue that the current American-led neoliberal world order will be challenged. How do you think the rise of China and the shift in global power will affect the global economic order?

I want to clarify one thing before I answer this question. In the very beginning, even the American model wasn’t neoliberal in today’s sense. In the 1950s, under Eisenhower, the top income tax rate in the United States was 92 percent. Some people joke that Eisenhower was the most communist president. A lot of countries had serious regulation on capital flows. Yes, America was more pro-market than other countries, but in comparative terms, America in the 1950s and ’60s was a lot more left-wing than it is now. So the U.S.-backed, postwar world order has gone through political changes. Until the early 1970s, the so-called “Washington Consensus” was very different from what it is now.

Back to your question, I think it’s not clear what China stands for. Ostensibly, they are socialist. It’s still a relatively poor country going through huge social changes. People outside of China mostly don’t know that every year there are hundreds of thousands of local riots, industrial strikes and demonstrations. In a way, what it is doing is actually not that different from what more advanced countries were doing in the late 19th and early 20th century. Many countries, including Japan and Germany, like China today, were using state-owned enterprises to develop their strategic industries. You can say that China is going through what all the other economically advanced countries have been through, and examples range from the U.S. in the mid-19th century to South Korea in the 1970s and ’80s. I’m not saying China is going through exactly the same process, but it is actually more accurate to see this as a part of a recurring pattern than something radically new. In that sense, I am not sure about the view that when China becomes stronger, the world will become different. Yes, the world probably will become different because more people will learn Mandarin and more people will go and study in China. But I don’t think it is going to be different in the sense that it’s going to be socialist or that stronger countries are going to be nicer to weaker countries.

What is the greatest economic challenge of China?

Of course, China has achieved a lot, and I have no doubt that it will go much further, but I think that there are great challenges ahead. One is the environmental issue. Some cities in China have become quite dangerous to live in. Of course, most [industrialized] countries faced this problem in the past. For example, England, Japan and Korea all experienced this problem. I am not saying this is unique to China, but it is different in the sense that China has been growing at the fastest pace and on the largest scale in human history, which has an impact on the scale of its environmental challenges.

An even more serious and immediate challenge is the inequality problem. Chinese inequality has grown rapidly over the past three decades. Now it is equal to that of the United States, one of the most unequal countries in the rich world. Of course, China’s level of inequality is considerably lower than that of countries in Latin America and Africa. However, it is a bigger challenge for China because China started from a very equal society half a century ago when everyone was wearing blue Mao suits. Within a generation, you now have a situation where some people live in a replica of the White House and others sleep on the streets. In China, people are not used to seeing this level of inequality.

People are accepting this situation because they are growing at nine or 10 percent annually. But what are they going to do when growth inevitably slows down in the next few decades to five or six percent or even lower? As I said, unbeknownst to the outside world, there are already over a hundred-thousand incidents of industrial strikes, demonstrations, and local riots [every year] in China. The last figure I saw was 180,000 instances few years ago, and it could be even higher today. Unless they resolve this problem, the whole process might be derailed.