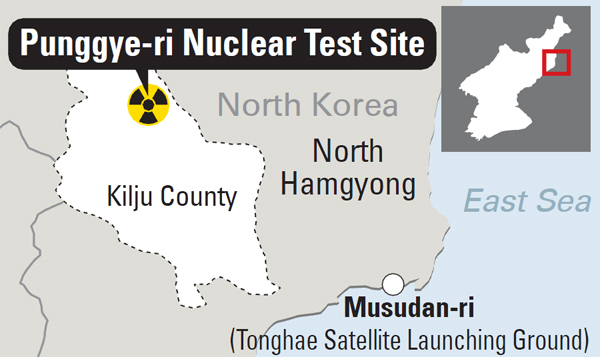 Increased activity was detected at an underground nuclear test site in North Korea, officials in Seoul said yesterday, citing a source who said that Pyongyang was preparing to take “unimaginable measures” ahead of U.S. President Barack Obama’s state visit to Seoul this week.

“We detected a lot of activity around the test site in Punggye-ri, North Korea,” Kim Min-seok, spokesman of South Korea’s Ministry of National Defense, said yesterday at a briefing. “We assume North Korea could abruptly carry out a nuclear weapons test within a short period of time, or there is the possibility that the regime could just pretend to conduct a test, given previous cases.”

To prepare for the possibility of an underground test or any other military provocations, the South Korean military on Monday launched an integrated crisis management task force between the Ministry of National Defense and the Joint Chiefs of Staff, Kim said.

Preparations for a nuclear test have almost been completed, the spokesman said, and a test appears to be “imminent.”

“They are now in a situation they can do [a nuclear test] whenever they want,” Kim said.

The spokesman cited a source who allegedly said that Pyongyang was working toward something “unimaginable for its enemy,” and that “something big” would happen before April 30.

Officials in Seoul and Washington had been sharing intelligence on the alleged ongoing activity near the test site, though Kim said the details on those activities could not be revealed.

The South Korean military yesterday stepped up its surveillance around the clock and tightened security against any possible military moves in North Korea, he said. The government report on a possible nuclear test came ahead of U.S. President Barack Obama’s two-day visit to Seoul, scheduled for Friday and Saturday.

Seoul officials are now focused on the possibility that North Korea could choose to mark the anniversary of its Korean People’s Army, which falls on Friday when Obama arrives in the South, through military aggression.

On Monday, North Korea’s Foreign Ministry denounced the U.S. president’s visit in a statement, calling it “an extremely dangerous act that brings black clouds of confrontation and competition [among concerned countries] on an increase in military budget and nuclear weapons.”

On March 30, North Korea warned in a statement to South Korea’s Ministry of Foreign Affairs that it would carry out “a new form of a nuclear test,” implying a fourth nuclear weapons test and possibly the first using a uranium-fueled nuclear bomb.

Ahead of the three previous tests in 2006, 2009 and 2013, Pyongyang always issued a statement in advance in the name of a spokesman from its Foreign Ministry, indicating its intention. The three underground tests followed within a month of those announcements.