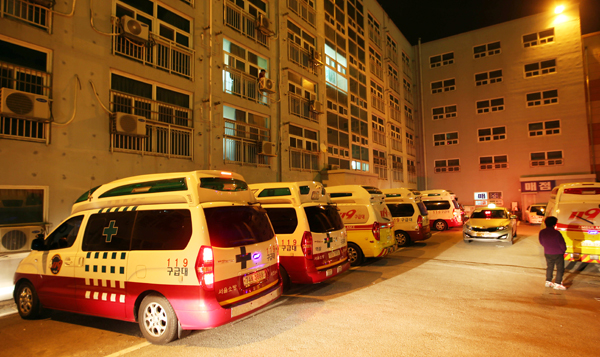 Ambulances carrying remains of victims from the Sewol wait in a parking lot at a hospital in Mokpo, South Jeolla. Local morgues are all already filled with victims of the ferry tragedy. By Park Jong-geun

The center of the sunken ferry tragedy shifted to Paengmok Harbor in Jindo, South Jeolla, where relatives of missing ferry passengers were invited to view remains to see if they are of their loved ones.

As rescue authorities extract a greater number of corpses from the capsized Sewol Ferry, relatives shifted from the gymnasium that has been their temporary home to the port 30 minutes away by car, where a row of snowy white tents have been erected for the viewing of remains and for families to rest.

Taking advantage of relatively calm weather and weaker sea currents - which rescuers had desperately wished for in the first days after the tragedy when there was a greater chance of survivors - divers have been able to pull more bodies from the upside-down ship. A total of 113 bodies have been found as of the seventh day of the hunt. A total 174 people were saved, all on the day of the sinking last Wednesday, while 189 more remain missing.

But the official number of total passengers on the ferry may rise to 477 after the remains of an unregistered foreign passenger, a Chinese national, were recovered yesterday.

Yesterday 26 bodies were pulled from the ferry, and although the weather conditions have improved, there is still almost no visibility within the Sewol. In effect, divers penetrating the craft from six points have to find the bodies by feeling around for them.

The white tents were set up by the Coast Guard on Sunday. When a body is brought ashore with identification, its relatives are asked to enter a tent to identify the remains.

If there is no identification on the body, which is usually the case, a description is posted on whiteboards at the port and on the wall of the gymnasium a half hour away.

The descriptions give the height of the victim, length of hair, dress and other identifying details.

The scene at the port is intimidatingly quiet. Journalists and policemen refrain from talking, smiling or making any remarks that may be interpreted by emotional relatives as flippant or disrespectful. The only sound is of camera shutters and anguished cries from relatives in the tents.

“Everyone else [from the gym] found their relatives [at the port],” said Lee Ji-young, 34, who was keeping vigil at the port for any word of her husband, a passenger on the doomed ferry.

“But I did not hear anything about my husband so I rushed to the port hoping I will hear something from the rescue authorities after waiting endlessly at the gym.”

Back at the gymnasium, relatives stared at descriptions of bodies posted on a wall.

One posting cited the gender of the victim, a female, before the number 104, signifying that she is the 104th casualty of the sinking.

A female relative read aloud from another posting. “Red pedicure. Hoody shirt. 160 centimeters in height .?.?. I think she is my daughter!” the woman cried. “Oh no! How am I going to live now?” The woman collapsed to the floor but was soon helped into an ambulance to be taken to the port for identification.

“I am looking for my younger sister,” said one woman, 22, while staring at the postings in the gym. “I come out to check the postings every hour.” Her sister was one of the missing students from Danwon High School in Ansan, Gyeonggi, who make up the majority of the missing passengers.

The joint rescue team comprised of the military, Navy and civilian divers, focused on scouring the third- and fourth-floor decks of the 460-foot ferry, where the dining hall and cabins were located. It was expected that a large number of students were on the third floor deck eating breakfast at the time of the capsizing.

Meanwhile, parents of students rescued from the accident pleaded with the press to stop attempting to interview their children at hospitals, citing the heavy emotional toll on them.

“Our hearts drop watching the slow rescue work,” said Jang Dong-won, the father of a female Danwon High School student who was rescued last Wednesday, before reporters at Ansan Office of Education.

“Children who survived the sinking say they are afraid of water bursting through the windows at their hospitals. And they feel guilty for surviving, for being alive,” continued the father with a shaky voice. “We are responsible to both those who are now in heaven and those who are alive today. What they need is absolute emotional stability.”