In Game 2 Atlanta outpaced by Indiana

In Game 2 Atlanta outpaced by Indiana 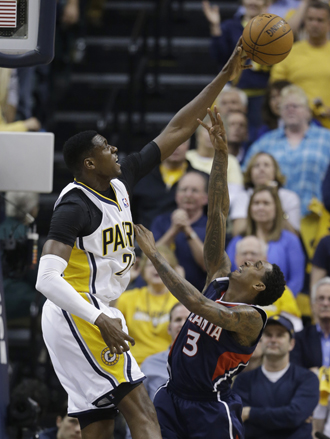 Atlanta Hawks’ Louis Williams (3) has his shot blocked by Indiana Pacers’ Ian Mahinmi (28) during the second half in Game 2 of an opening-round NBA playoff series Tuesday in Indianapolis. Indiana defeated Atlanta 101-85. [AP/NEWSIS]

Paul George scored 27 points and George Hill had all 15 of his points in the second half, leading the Indiana Pacers to a 101-85 victory over the Atlanta Hawks on Tuesday night in Game 2 of their first-round playoff series.

The Pacers and Hawks are tied at a game apiece heading into Game 3 in Atlanta on Thursday.

George was especially effective even though he spent much of the night defending Hawks point guard Jeff Teague, who had 14 points. Paul Millsap finished with 19 for Atlanta.

The first 24 minutes looked like an exact duplicate of Game 1, but the Pacers pulled away with a 31-13 third quarter.

Top-seeded Indiana took its first lead since the first quarter on Lance Stephenson’s tiebreaking three-point play with 7:58 left. The Pacers then put the game away with a 25-2 run that stretched into the fourth quarter.

David West got it started with a bank shot that made it 70-65 with 3:20 left. George made a 3 to make it 79-65 heading into the fourth, and the Pacers scored the first eight points of the final period.

Lou Williams ended Atlanta’s scoring drought with a jumper with 9:03 left, making it 87-67. But the Pacers coasted from there.

The series now shifts to Atlanta, where the Pacers have won only two times since December 2006 - though one of those wins allowed Indiana to close out last year’s first-round series 4-2.

Tuesday’s win at least gave the Pacers a brief respite from the constant questions that have dogged them throughout their late-season swoon. TNT commentator Charles Barkley even questioned the Pacers’ toughness on Sunday.

But Indiana tightened up in Game 2 and got back to playing the kind of basketball that it did during the first half of the season.

With the two Georges and Stephenson leading the way in the second half, the offense rolled. And the Pacers finally figured out how to defend Atlanta’s spread offense, too.

After allowing 11 3-pointers in the opener and eight more in the first half Tuesday, the Pacers gave up just two over the final 24 minutes of Game 2.

The combination allowed Indiana to salvage a sorely needed split of the opening two games - despite chasing the Hawks for most of the first half.

The Pacers appeared to be in trouble when they trailed 26-21 after the first quarter and fell into an 11-point hole in the second. They closed to 52-48 at the break and carried the momentum over into their strong second half.

Hill’s 7-foot runner with 8:34 left in the third tied it at 59. Stephenson’s three-point play 36 seconds later gave Indiana the lead and George’s buzzer-beating 3 capped an 11-0 quarter-ending run. George celebrated by slowly walking to the corner of the court and yelling to the crowd.