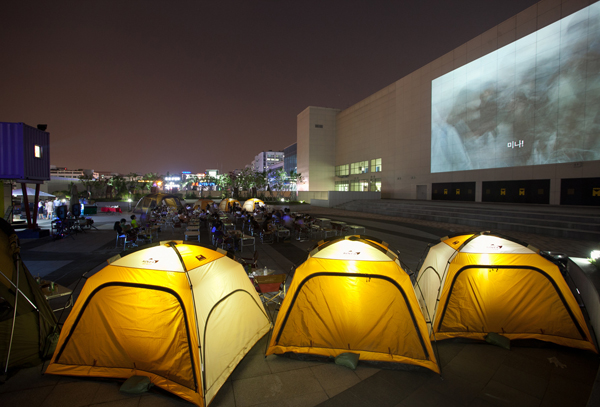 Moviegoers are able to watch films inside a tent under open skies at Megabox Open M. [JoongAng Ilbo]

Outdoor camping is all the rage in Korea these days. It seems like more parks and facilities for campers are opening all the time. But camping movie theaters?

Looking to latch onto this trend, the multiplex chain Megabox is launching the 2014 season for its Open M theaters, two outdoor movie screens, both located in Ilsan, northwest of Seoul. It’s a bit like drive-in movies, but instead of watching from a car, you can watch from a tent.

Open M started last year with a screen in Baekseok-dong, on the southeastern side of Ilsan, opening last June. But now Megabox is adding a location at One Mount, an entertainment complex on the western side of the suburb.

Open M allows people to enjoy the camping experience while watching films, holding a barbecue and enjoying a cool beer.

With a wide range of outdoor activities coming to Ilsan - like the Goyang Korea Flower Show, which opens next week - Megabox expects Open M to be quite popular. There are also special promotions for Children’s Day on May 5 and during the summer vacation season.

In addition, Open M plans to hold football-watching parties during the World Cup in June and July.

The outdoor theater opens from Friday to Sunday throughout the year. From the end of April, viewers can purchase an option that includes unlimited snacks and barbecue.

Individual headphones will be provided for each viewer.

For more information, visit the Megabox website at www.megabox.co.kr or call 1544-0070.