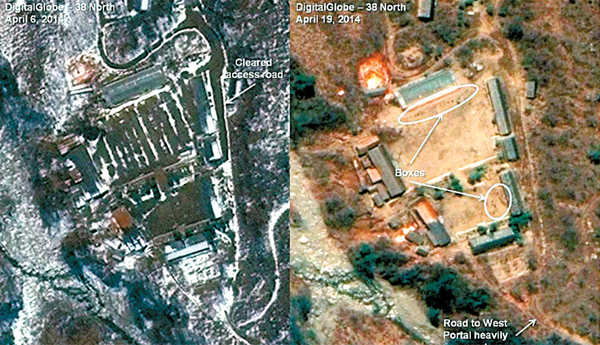 Satellite images on 38 North, the website of the U.S.-Korea Institute at Johns Hopkins’ School of Advanced International Studies, shows new operations at the Punggye-ri Nuclear Test Site. An April 6 satellite image, left, shows increased activity in the main support area. In the image on April 19, right, in the south portal area, there appears to be movement of crates, boxes and other materials. [NEWSIS]

U.S. President Barack Obama clarified his intention in an interview with the Japanese Yomiuri Shimbun to make a joint effort with Seoul and Tokyo for the denuclearization of North Korea.

“We’re going to stand firm in our insistence that a nuclear North Korea is unacceptable,” Obama said yesterday in a letter to the Tokyo-based newspaper, according to its English edition. “The commitment of the United States to the security of Japan and South Korea will remain unwavering.”

Obama called North Korea’s relentless provocations, including its missile and nuclear weapons tests, “a threat to our allies, Japan and South Korea, a threat to the region and, increasingly, a direct threat to the security of the United States.”

“The burden is on Pyongyang to take concrete steps to abide by its commitments and obligations, and the United States, Japan and South Korea are united in our goal - the complete denuclearization of the Korean Peninsula,” he was quoted as saying in the newspaper.

But that time has passed, the American president added, and North Korea’s leadership can no longer win any concessions by making threats, as cooperation among the three allies has strengthened against the regime’s nuclear arsenal.

South Korea is part of Obama’s four-nation state trip to Asia. After a three-day visit to Japan, he will visit Seoul on Friday and Saturday before heading to Malaysia and the Philippines.

Obama began his trip with a closed-door meeting with Japanese Prime Minister Shinzo Abe yesterday at a local sushi restaurant in Tokyo, the Yomiuri Shimbun said.

He also clarified for the first time that the Senkaku Islands in Okinawa Prefecture are subject to Article 5 of the Japan-U.S. Treaty of Mutual Cooperation and Security, which obligates Washington to stand with Tokyo in the territorial dispute over the isles, which China calls Diaoyu.

“The policy of the United States is clear - the Senkaku Islands are administered by Japan and therefore fall within the scope of Article 5 of the U.S.-Japan Treaty of Mutual Cooperation and Security,” he said. “And we oppose any unilateral attempts to undermine Japan’s administration of these islands.”

His remarks on North Korea’s nuclear weapons program came a day after South Korea’s Ministry of Defense said it had detected increased activity near a nuclear test site in Punggye-ri in the northeastern part of the country.

On March 30, North Korea warned in a statement to South Korea’s Ministry of Foreign Affairs that it would carry out “a new form of a nuclear test,” implying a fourth nuclear weapons test and possibly the first using a uranium-fueled nuclear bomb.

Ahead of the three previous tests in 2006, 2009 and 2013, Pyongyang always issued a statement in advance in the name of a spokesman from its Foreign Ministry, indicating its intention. The three underground tests followed within a month of those announcements.

However, a U.S. report was unsure about a possibility of a nuclear test, given an analysis on satellite images, although a boost in activity was detected near the test site.

“Recent press speculation has focused on the possibility of a nuclear detonation during U.S. President Barack Obama’s upcoming visit to Seoul on April 24 to 25,” according to 38 North, an analytical website that is part of a program by the U.S.-Korea Institute at the Paul H. Nitze School of Advanced International Studies at Johns Hopkins University. “That may be possible but appears unlikely based on the limited commercial satellite imagery available and observations of past North Korean nuclear tests.”

The report said Pyongyang appears to have begun new operations at the site, given “an increase in activities at the Main Support Area,” but the operation has not reached “the high level of intensity” involving the movement of vehicles, troops and other equipment.

“Moreover, other possible indicators present before the North Korean nuclear tests in 2009 and 2013, such as communications vans and a satellite dish intended to transmit pre-test data, have not been spotted,” it added.