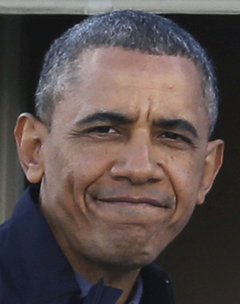 Although it has been only two years since U.S. President Barack Obama last visited South Korea in March 2012 to attend the Nuclear Security Summit, the Northeast Asian region has undergone enormous change.

Korea has been at the receiving end of several threats and challenges from North Korea, witnessing the reclusive state’s successful missile launch and its third nuclear test. It has also dealt with a number of diplomatic issues among its neighbors.

Several analysts in Seoul say Obama will attempt to make progress on or resolve several of those issues during his four-nation trip to Asia, starting in Tokyo and then flying on to Seoul, Malaysia and the Philippines.

Three issues at the forefront include North Korea’s relentless provocations; the longtime diplomatic dispute between Seoul and Tokyo over sensitive wartime history; and China’s rise as a superpower and its developing relationship with South Korea under the Park Geun-hye administration.

The American president himself is also looking to consolidate his leadership ahead of the November mid-term election.

Under the rule of leader Kim Jong-un, Pyongyang has continually expressed its aggression, launching two long-range missiles in 2012 and carrying out a third nuclear test in February 2013. Such actions have also become higher in frequency and more threatening.

South Korea’s Defense Ministry earlier this week said it had detected an increase in activity in the North involving the movement of vehicles and personnel near its nuclear test site in Punggye-ri.

They also cited the possibility of a fourth-ever nuclear test.

Park In-hwi, an international studies professor at Ewha Womans University, said Obama was expected to discuss President Park’s ambitious plans for the unification of the two Koreas as well as her Dresden Declaration.

“Whether Obama would offer more effective and detailed support for Park’s trustpolitik - not just merely supporting her idea - is one of the points we are watching in their talks,” the professor said.

Another possible task for Obama during the Asia visit would be to arbitrate the diplomatic disputes between South Korea and Japan, which are both close allies of the United States, particularly the historic sensitivities.

“One of the important possible goals for Obama during his visit would be restoring relations among the three allies, Washington, Seoul and Tokyo, and getting them to cooperate over security issues,” said Cho Yang-hyeon, a professor at the Korea National Diplomatic Academy.

“For this, we need to see how he would convey the message to Tokyo that it is important for Japan to have the right perception on historic issues.”

On the other hand, under the Park administration, diplomatic relations between Seoul and Beijing have been running strong, with China apparently expanding its influence in Asia.

When Obama missed the Asia-Pacific Economic Cooperation(APEC) summit in October 2013 due to the federal government shutdown, Chinese President Xi Jinping made his presence known by declaring that China would create an Asian infrastructure bank to aid developing countries.

“Obama will probably put his emphasis on Asia again and express his intention to ensure diplomacy with Asian allies throughout various sectors, including culture, economy and trade,” said Victor Cha, a senior adviser at the Center for Strategic and International Studies.

But domestic politics in the United States could affect his visit as well, analysts say.

Many lawmakers are reluctant to grant the Obama administration fast track authority on the Trans-Pacific Partnership (TPP) and are concerned that a free trade deal would hurt the economy and stifle domestic job creation. Advancing negotiations with Japan over TPP conditions will be one of the president’s priorities during his visit to Tokyo.