Ferry operator is raided by teams

Ferry operator is raided by teams 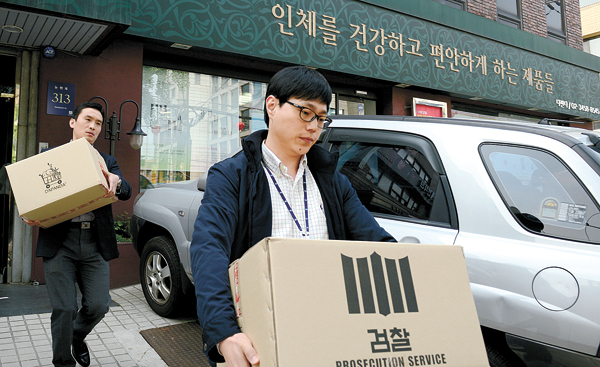 Prosecutors yesterday raided the operator of the sunken ferry Sewol and residences of the family that owns it as part of a probe into allegations that Yoo Byung-eun, the de facto owner of Chonghaejin Marine Company, is involved in financial irregularities including tax evasion, embezzlement and illicit foreign currency trading.

Yoo is the head of the family behind the operator’s holding company I-One-I Holdings and the founder of the operator’s predecessor, Semo Group, which went bankrupt in 1997. Two sons of Yoo are registered as majority owners of the holding company and its sister companies, but the 73-year-old Yoo is considered the master of the group.

Some 50 investigators from the Incheon District Prosecutors’ Office raided the office of Chonghaejin in Incheon Port International Passenger Terminal yesterday morning and the houses of Yoo and one of his sons in Seoul, as well as some 10 offices of affiliated companies and religious groups believed to be linked with the family in Seoul and Incheon. They confiscated financial documents, internal reports and computer hard drives.

“We will try to look in the companies’ financial transactions to verify whether Yoo is involved in tax evasion and embezzlement,” a prosecutor from the Incheon Prosecutors’ Office said.

“After examining data, we will summon the Yoo family for questioning,” said the prosecutor.

The investigation into the family’s businesses and assets could also be relevant to compensation for the families of victims of the April 16 ferry capsizing.

So far, the government has used public funds to support the families of the dead or missing and conduct rescue operations. But it plans to charge expenses to the operator of the ferry.

Investigative agencies have stumbled on irregularities while investigating the ownership structure of the ferry’s operator. One focus of their investigation is on whether the Yoo family reacquired the shares of Semo Group below market price through complex cross holdings of shares.

When Semo Group was under court receivership, a consortium consisting of the former subcontractors of Semo acquired the faltering company. The consortium is now suspected of selling shares of Semo at below market prices to I-One-I Holdings, where the two Yoo sons are major shareholders.

According to the Financial Supervisory Service, the major shareholders of Chonghaejin Marine, the Sewol’s official owner, are the two sons of Yoo Byung-eun, the former chairman of Semo Group, a large ferry and cruise operator that operated boat trips on the Han River in Seoul until it went bankrupt in 1997.

FSS audit reports on domestic companies show that Chonghaejin has two major shareholders: 39.4 percent of its shares belong to Chonhaeji, which specializes in producing container ships, oil tankers, bulk carriers and LNG ships, while 7.1 percent is owned by I-One-I Holdings, a business consulting company based in Seoul.

The major shareholder of Chonhaeji is also I-One-I holdings, which holds 42.8 percent of its stock.

Yoo Dae-gyun and Yoo Hyeok-gi, the former chairman’s sons, are the major shareholders of I-One-I Holdings. Each holds 19.44 percent of the company’s stock, or nearly 40 percent combined, the FSS report said. Assets owned by the elder Yoo were estimated at 560 billion won ($539 million), according to the prosecution.

The prosecution also alleges that Yoo set up a shell company to evade tax and manage profits from the overseas branches of his companies.

Along with the prosecutors, the Financial Supervisory Service and National Tax Service have been tracing bank accounts and foreign real estates purchased by Yoo and his two sons, including a $3.5 million mansion in New York owned by his second son.

Following the financial regulators’ probe, up to 44 executives and shareholders of Chonghaejin Marine Company were banned from leaving the country on Tuesday, including CEO Kim Han-shik, who vanished from the public eye after a news conference last Thursday.

Prosecutors also vowed to verify whether the owner family and the operator are liable for compromising emergency preparedness and safety training for the ill-fated ferry.

The local media reported that the shipping company spent only 540,000 won last year to train its staff in safety measures.

Prosecutors are also looking into whether Yoo bribed high-ranking officials to conceal his companies’ unlawful practices. He is also accused of forcing members of a religious cult to buy shares of his companies. Also searched was a building in Yongsan District used by the cult. Yoo is reportedly the leader of a pseudo-Christian cult and is currently accused of forcing members of his cult to invest in companies run by him and his sons.

Prosecutors investigated Yoo in 1987 on suspicions that he was behind a mass suicide of 32 religious believers. At that time, he served as a minister of the cult.

Local media outlets also reported that many employees of the Yoo family’s companies and subsidiaries are members of the cult.

But prosecutors said the current investigation is not focused on Yoo’s role as a religious figure.

“We know that people are interested in the issue,” said a prosecutor at the Incheon District Prosecutors’ Office. “But the focus is the company’s financial irregularities,” the prosecutor said.

The Gwangju Office is focused on investigating the specific causes of the ferry tragedy, while the Busan Office is tasked with probing major private and public organizations responsible for safety checkup on the Sewol ferry. The Busan District Prosecutors’ Office is also investigating the Korean Register of Shipping, which gave the ferry passing grades for safety in February.

The prosecution said it would take a while to discover any unlawful practices by Chonghaejin due to its convoluted shareholding structure.

“We started off seeing damages, but the investigation is widening as the company is suspected of many illegal acts,” the prosecutor said.