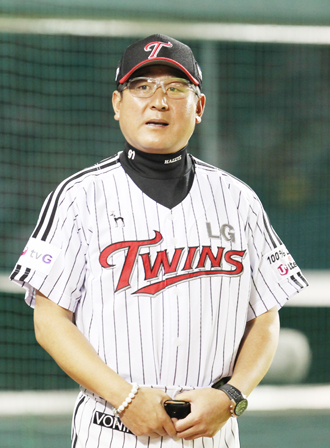 Before the game, the Twins had said Kim would not be at the ballpark due to personal reasons and that the team would be managed by coach Cho Kye-hyun.

“Kim tendered his resignation to take responsibility for the team’s poor performance this season,” the team said in a press release.

According to sources, Kim submitted his resignation after the team lost to the Lions on Tuesday.

At the hotel where the team stayed for the three-game series with the Lions, Twins general manager Baek Soon-gil and CEO Nam Sang-gun tried to persuade him not to leave, but Kim stuck to his decision.

“He seemed like he was stressed from the team’s poor performance,” said Baek. “He also said the club would bounce back if he leaves. He said he is leaving because he loves the team so much.”

There are rumors the club’s front office interfered with Kim over how he was running the club, but Baek denied them.

“If we really had those troubles,” he said, “why did he sit down and speak with me for more than 40 hours in the past two days?”

In Kim’s first year at the helm in 2012, the Twins had several talented individuals but never gelled as a team and finished next to last.

Last year, however, the leadership of the former KBO all-star player totally changed the team’s character, and the Twins finished second to advance to the postseason for the first time in 11 years.

The biggest reason for Kim leaving so early in the season is the club’s poor recent performance and the bean-ball incident in which pitcher Jung Chan-heon hit Jung Keun-woo of the Hanwha Eagles twice last week, which generated a storm of criticism from fans and analysts.

The Twins are mired in last place with four wins, 13 losses and a draw, and had a four-game losing streak as of Wednesday.

After Jung was suspended for five games and fined 2 million won ($1,923), many of his veteran teammates shaved their heads like soldiers preparing for battle.

“Everything is my fault,” Kim said when he met with reporters at the dugout before Tuesday’s game. “I will try my best to put an end to this losing streak.”

Kim, however, couldn’t keep that promise as he never returned to the dugout.

The Twins haven’t announced any plans for hiring a new manager.

For the time being, they said, coach Cho, who managed the Wednesday game, will lead the club.