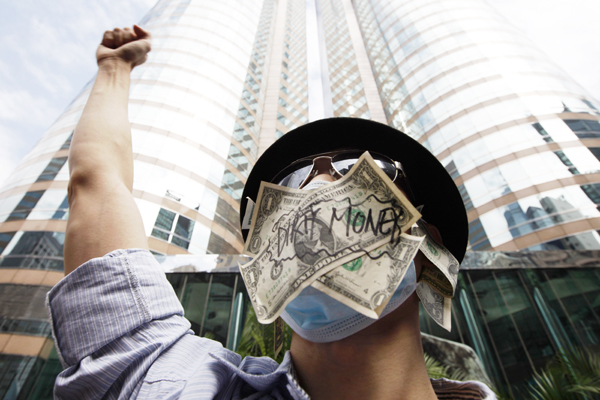 A protester takes part in the “Occupy Central” protest outside the Hong Kong Stock Exchange in 2011. [REUTERS/NEWS1]

In a decidedly odd twist of fate, Hong Kong’s version of the “Occupy Wall Street” movement has just been thrown a lifeline by a bunch of bankers, whose wealth the movement is meant to abhor. That strange fact alone should give leaders in Beijing pause.

This week, in an open letter to Chinese President Xi Jinping, former hedge-fund manager Edward Chin and 70 other signatories called for “genuine” universal suffrage for the former British colony. That’s what China promised to deliver within 20 years of the city’s handover in 1997. Of course, it was also hoped that by 2014, China would be looking more like Hong Kong with a freer media, transparent financial system and basic human rights. Instead, the Communist Party in Beijing wants Hong Kong to be more like China.

Chin and the other signatories fear that Chinese pressure is dangerously eroding Hong Kong’s reputation for transparency and institutional integrity. “The current political climate in Hong Kong is having a negative impact to Hong Kong’s competitiveness as a major financial center in Asia,” they write, and it’s a “stumbling block to the city’s long-term social, political and economic growth.” When I contacted Chin by email today, he added: “We don’t want this city to die, so we have to fight hard to defend the already fragile core values of this city.”

Hong Kong’s “Occupy Central” activists hardly had any impact with their 2012 protests, held in the shadow of HSBC’s iconic headquarters. By the time the ragged band of protesters had folded up their tents and gone home, Leung Chun-ying was easing into his job as the latest in a line of hapless Hong Kong chief executives chosen by China. He paid the protests little, if any, mind.

The fact is that in a city as ruthlessly commercial as Hong Kong, only bankers and property tycoons probably have enough street cred to shame Leung. And let’s face it, the man needs some serious shaming. Since he assumed office in July 2012, Hong Kong has regressed even faster than under his predecessors Donald Tsang and Tung Chee-hwa. A chill has descended on the city’s formerly freewheeling media. Leung enraged the public by trying to force a “patriotic education” program on students at the behest of Beijing. And the city’s Gini coefficient, a measure of income inequality, is worsening. So is pollution.

There’s a simple reason why Hong Kongers should choose their own leader: Beijing is terrible at it. No one would benefit more from a competent and forward-looking leader in Hong Kong than China itself. Xi has enough on his hands, what with trying to recalibrate the world’s second-biggest economy, control the Internet, cap ethnic tensions and avoid a war with Japan. The last thing he needs is more drama in Hong Kong, where activists are planning another round of “Occupy Central” protests this summer.

If Beijing can’t find a relatively competent and imaginative CEO to make non-contentious decisions to improve life in Hong Kong, then let the people do it. Or, at a minimum, call Leung in for a serious scolding. Why not prod him to take one year’s worth of the city’s budget surplus and act faster to remove all those smoke-spewing vehicles and ferries that have darkened Hong Kong’s air? That alone would immediately improve quality of life and give the government a bump in opinion polls. And why not pledge to curtail coal use among the tens of thousands of factories sitting across the Pearl River Delta as a show of goodwill toward Hong Kongers?

By monopolizing the selection of Hong Kong’s leaders, Beijing ends up with duds like Leung and Tsang vying for the job of Chief Executive. It’s become such a poison-chalice of a gig that only the truly bored and talentless, or those blindly beholden to Beijing’s system of patronage - here, think Tung - apply. As the old adage goes, people tend to get the government they deserve. But in Hong Kong’s case, citizens get the one Beijing’s incompetent CEOs have wrought.

Now, even the bankers that give Hong Kong its relevance are turning on the city’s leaders. It makes you wonder if Hong Kong is experiencing the political equivalent of the “Minsky moment” investment types are always searching for. That’s a sudden fall in asset values bloated by credit. Hong Kong’s problem is similar - a plunge in public confidence bloated by false promises and Beijing’s overvalued trust in its staffing choices. Even the bankers can see a bust is coming.