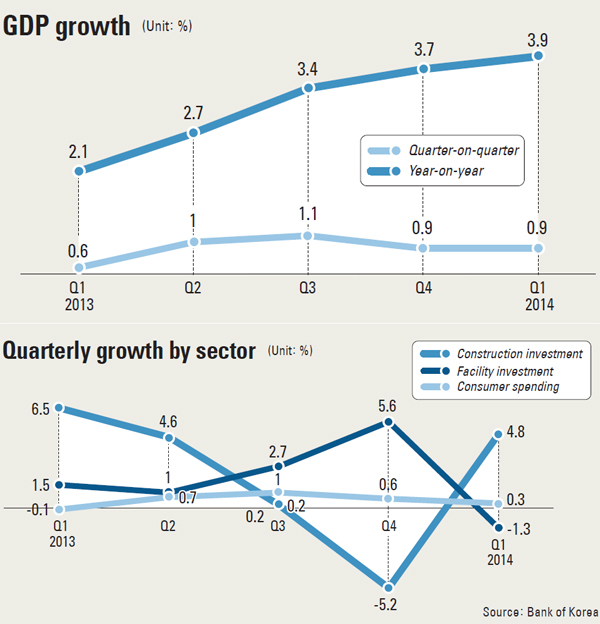 The Korean economy grew nearly 4 percent in the first three months of the year, the best year-on-year performance since 2011.

Narrower indicators, however, suggest the economy still has not fully recovered.

According to the Bank of Korea yesterday, GDP expanded 3.9 percent from January through March compared to the first quarter last year.

The last time the economy expanded more than 4 percent was the whopping 4.9 percent year-on-year increase in the first quarter of 2011.

Although the economy grew sharply from a year ago, quarter-on-quarter growth was less impressive.

Compared to the last three months of 2013, the economy inched up 0.9 percent for the second consecutive quarter.

The situation in the first quarter differs from the fourth quarter as consumer spending, which has contributed to the economic recovery, slowed.

In a statement yesterday, the central bank credited first-quarter growth to a continuing expansion of exports and significant increase in construction investment.

While construction investment in the fourth quarter dropped 5.2 percent compared to the third, it jumped 4.8 percent in the first three months of this year.

The growth was largely attributed to real estate support measures the Park Geun-hye administration has pushed since the beginning of the year. The real estate market, which had been stagnant since late 2008, has started to recover.

On the other hand, consumption in the first quarter slowed to a 0.3 percent growth rate from 0.6 percent in the fourth quarter.

“We suspect that household income has shrunk because year-end tax returns were less and in some cases taxpayers had to cough up additional taxes,” said Jung Young-taek, head of the economic statistics department at the BOK.

In 2012, the Lee Myung-bak government changed the withholding tax system to put more cash in workers’ wallets and encourage people to spend more.

The catch, however, was that the refund from the year-end tax settlement would shrink.

In addition, the government has been trimming several tax refund programs, including credit card spending.

Facility investment, which is a key indicator in assessing the activity of companies, shrank 1.3 percent after expanding 5.6 percent in the fourth quarter.

“It’s really hard to say that the economy is fully on a recovery path,” said a BOK official. “Yes, the economy saw near 4 percent growth in the first quarter. But it grew partly because the economy a year ago was much worse.”

Although exports remain stable, a sharp drop in imports raises concerns. Many Korean companies rely on imported parts for their final products, and fewer imports indicate some companies may be struggling.

Exports grew 1.7 percent quarter-on-quarter compared to 1.4 percent in the fourth quarter. During the same period, imports slipped 0.5 percent after rising 2.9 percent from October through December.

The BOK remains optimistic that the economy will reach the 4 percent growth it recently projected. Considering that the manufacturing sector showed stronger growth of 2.1 percent in the first quarter compared to the 0.8 percent growth in the fourth, the economy seems to be on track.

He noted that pressure on the central bank to make an additional rate cut is “dissipating,” and that the BOK will likely add 0.25 percentage point on the 2.5 percent key rate in the third quarter. But some market experts remain skeptical, particularly since consumption has quickly retreated since last week as the nation mourns those who lost their lives in the sinking of the Sewol ferry.

“The impact of the ferry tragedy is larger than anyone had expected earlier,” said a market analyst who requested anonymity due to the sensitivity of the issue. “At this point, it is hard to project when the mood will change.”