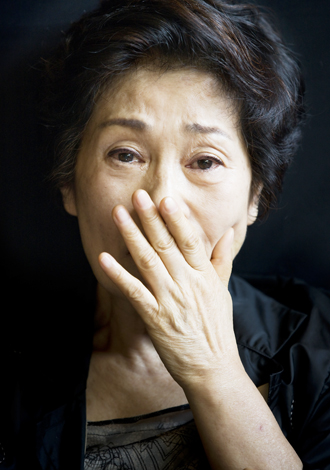 “People overestimate life at first. They think it will last forever and take it for granted. But then later, they underestimate it. They call it tedious, short and sometime they even attempt to throw it away. However, as time passes by, people realize that we are just borrowing it from God and that we have to appreciate it.”

The speech is from “Oscar and the Lady in Pink,” a one-woman drama adapted from a novella by French writer Eric-Emmanuel Schmitt. As actress Kim Hye-ja, 72, rehearsed it in a practice room in Hapjeong-dong, western Seoul, on Wednesday, large tears rolled down her cheek.

It was precisely a week after the Sewol ferry tragedy - the worst maritime disaster in Korea in more than two decades - leaving the whole nation in deep despair.

After playing last November in 13 cities around Korea, the play returns on May 2, running at Chungmu Art Hall in central Seoul until June 15.

But even though Kim has been living with the play for six months, never has the weight of the word “life” felt heavier than these days.

“Oscar and the Lady in Pink” is the story of a 10-year-old boy, Oscar, who is dying of leukemia and talks about life and death with his nurse, Granny Rose. In the 110-minute play, Kim plays 11 roles, including Oscar, Granny Rose, Oscar’s parents and his girlfriend. For the past year, “Oscar” has been the only thing on Kim’s agenda, and she has not been on a single TV show since she was featured in the JTBC sitcom “I Live in Cheongdam-dong” in 2012.

“I am such a single-celled creature,” said Kim to the JoongAng Ilbo, an affiliate of the Korea JoongAng Daily. “I can’t focus on things when I am caught up in something else.”

Kim, who has been a goodwill ambassador for the relief and development organization World Vision and has been helping children in African for the last 20 years, said that as soon as she saw the script, she had to play it.

In the play, Oscar keeps asking why God has created someone as sick as him. While witnessing so many children dying of hunger and war in Africa, Kim often asked the same question. 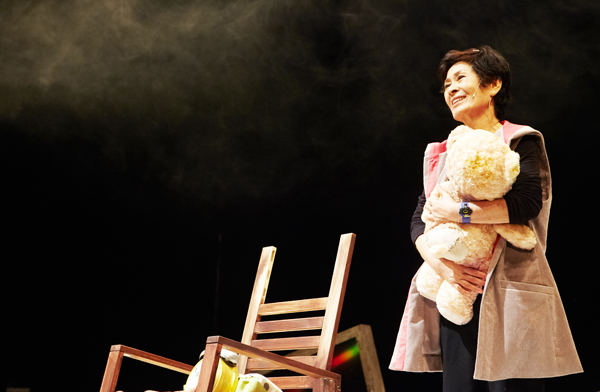 “When things didn’t turn out the way I wanted, I always asked God ‘Why.’ But he didn’t answer. Then one day I realized there is no right answer. And instead of figuring it out, I learned to see the world through this play.”

In the play, Oscar lives his last 12 days pretending he gets 10 years per day and starts to see the bright side of the world. As Kim has been playing Oscar for about half a year now, she says Oscar’s way of looking at the world has affected hers.

“When I get mad or annoyed, I remind myself how I used to like that person or work the time I first confronted it. When you go back to your first experiences, everything changes to something better.”

So what would Granny Rose say if she met the families of the victims of the Sewol ferry?

“I would just sit by them without saying anything. No words of consolation would be able to mend their hearts. Unless your child is down there in that boat, you should say nothing.”