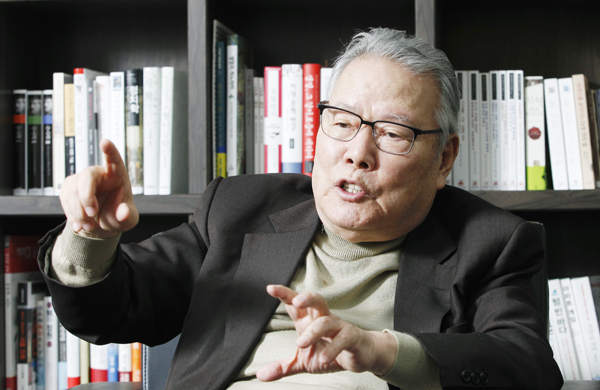 Lee O-Young, 80, one of Korea’s most influential critics and writers, talks in his office in central Seoul By Park Sang-moon

What might reverse the deteriorating relations between Korea and Japan? An important solution could be cultural exchanges, to help both peoples look at history by the universal standards of human rights rather than nationalism - that’s the view of Lee O-young, former culture minister and best-selling writer, in a recent interview with the Korea JoongAng Daily.

Lee, 80, is one of Korea’s most influential critics, having won serious international recognition with the book “Smaller Is Better: Japan’s Mastery of the Miniature.” Lee actually wrote the original book in Japanese and published it there first in 1982.

The book caused a sensation in Japan, selling 120,000 copies in its first five months and arousing both praise and criticism from Japanese scholars. Then it was translated into Korean, English, French and other languages.

In recent days, some Japanese scholars, like the renowned literary critic Kojin Karatani, have said they reread “Smaller Is Better,” but this time out of concerns over the Shinzo Abe government’s policies of political and economic expansion. Karatani said he had been critical of Lee’s book, but he recently meditated on Lee’s argument that Japan should remain a small and strong country like Issun-boshi, the 1-inch-tall hero from Japanese folklore. In Lee’s book, he warned that Japan tends to turn into Oni (a Japanese demon or ogre) rather than a good giant when it takes expansionist policies.

Lee established the Northeastern Asia Institute of Comparative Cultural Studies in 2008 to research traditional and contemporary cultures of not only Korea and Japan but also China, and to review the relations between the three countries. The KJD met him in the institute, near City Hall subway station in central Seoul.

“Let’s think about Kamikaze,” Lee said. Kamikaze, which means “divine wind” refers to systematic suicide attacks by Japanese military pilots against Allied naval vessels during the Pacific War (1941-45) as part of World War II. Many young Japanese and even Koreans forcibly conscripted under colonial rule were brainwashed or forced to pilot combat planes without landing gear and die as a suicide attacker. 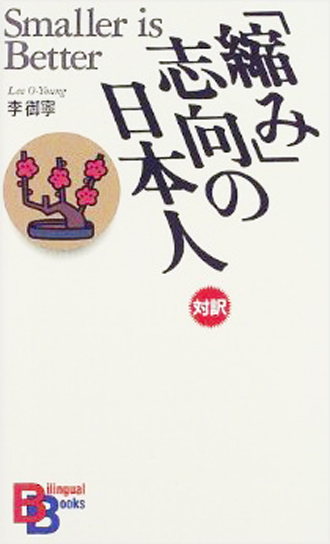 The cover of the bilingual (Japanese-English) version of “Small Is Better.”

“Was that a normal government?” Lee asked. “Let’s look at Western, modern countries in World War II. Even when they put life-term prisoners into dangerous military situations, they would prepare a team in the rear to support their return. So, could a normal government order the country’s innocent young men to just die without efforts to survive?”

“The Japanese should know that, and we Koreans should help them know it,” Lee continued. “Koreans celebrate Aug. 15 as Independence Day, while many Japanese bitterly commemorate the day as the anniversary of defeat in the war. But we need to propose that both Korea and Japan celebrate the day together as a day of peace - a day when the ordinary people of the two nations were freed from crazy militarism and totalitarianism.”

With that in mind, Koreans should focus on persuading the Japanese, especially young people, into abandoning nationalism, rather than confronting all of Japan in nationalistic and hostile ways, he added.

Lee is a rare Korean critic and writer who has written steadily and remained inspiring and influential to the public, both young and old, for nearly six decades.

Earlier this year, he published a new book “The Vita Capitalism” on alternative ideas to the market economy principles.

It was 1956 when he first gained attention in Korean literary circles with a critique of poet and novelist Yi Sang (1910-37). At that time, he was still a student at Seoul National University, majoring in Korean literature.

The next year, he caused a sensation in the literary world by publishing another critique in the daily newspaper Hankook Ilbo, “Destruction of Idols,” which harshly criticized some local literary lions of the time.

What made Lee famous among the Korean public was a series of essays titled “In This Earth and in That Wind: This Is Korea.”

First published in the daily newspaper Kyunghyang Shinmun and then as a book in 1963, it is a witty, critical analysis of Korean culture and thinking, based on literature, mythology, arts, customs and especially linguistic habits. The book sold more than 300,000 copies in the first year it was published.

Writing many books - not only essays but also novels, Lee worked as an editorial writer for some major newspapers including the Korea JoongAng Daily’s mother paper, the JoongAng Ilbo. He is now an adviser to the newspaper. He has also taught, mainly at Ewha Womans University, where he is now a professor emeritus.

In addition, Lee founded the monthly literary magazine Literary Thought in 1972. The versatile critic also designed the opening and closing ceremonies of the 1988 Summer Olympics in Seoul. Then, he served as Korea’s first ever culture minister for two years until late 1991.

The KJD talked with him about cultural solutions to solve the deteriorating relations between Korea and Japan and about his new book “The Vita Capitalism.” 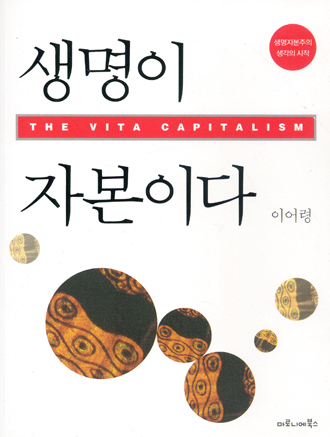 The cover of Lee’s latest book “The Vita Capitalism.”

Q.What is the cultural background behind the recent nationalistic moves by Japanese politicians?

A. I heard that some Japanese diplomats who had worked in the Middle East were spreading the idea that Japan’s current conditions are similar to those of ancient Carthage after the Second Punic War. [Carthage was a once-powerful ancient county in North Africa on the Gulf of Tunis that fought with ancient Rome three times in the Punic Wars.]

Because Rome utterly banned Carthage from developing military power after defeating it in the Second Punic War, the country focused on commerce and trade and soon achieved great wealth. Then, for fear of its economic power, Rome invaded Carthage and completely destroyed it in the Third Punic War.

Some Japanese people think that their country, greatly wealthy but without military power to protect its affluence due to the so-called “Peace Constitution,” will fall into the state of ancient Carthage. Then, in this theory, what country would be ancient Rome? The United States, not China, if the analogy is consistent.

So, this is a strange theory but it can appeal to some of the people who were depressed by the 2011 Tohoku earthquake and tsunami and the following nuclear power plant disaster and are nervous about the rise of China. But if the Japanese people are afraid of China, they need to get closer to Korea, which shares many more similarities in systems and values with Japan, such as a market economy, democracy and individualism, than China, and can mediate between Japan and China. So it is not wise for Japanese politicians to make moves to offend Koreans.

Japanese right-wing politicians continue to visit Yasukuni Shrine, which Korea and China regard as a symbol of Japan’s past militarism. Some Western analysts say that is all right because it is just a religious institute, not a political institution, which happens to have 14 convicted war criminals also enshrined. What do you think about it?

Yasukuni is not a normal shinto shrine. Shinto is a pantheistic religion. But Yasukuni is a shrine for a special shinto, which worships the monarch that Japanese call “Tenno” meaning “heavenly emperor,” as the god.

This kind of shinto doesn’t have a long history. You know, powerful shoguns virtually ruled Japan in the past, with the monarch having only a nominal position and little power.

It changed with the Meiji Restoration in the late 19th century. At that time, the special shinto to bolster the monarch’s position and power was created. In Yasukuni, only the people that devoted their lives to “tenno” are enshrined - not the people that devoted their lives to “Japan.” Japanese soldiers died during the Pacific War, crying “Tenno heika banzai” - Long live the Emperor - not crying “For Japan!” or “For our country!”

Accordingly, Yasukuni cannot be compared to Arlington National Cemetery in the United States, not only because of its inclusion of war criminals but also because of its unique origin. Yasukuni Shrine is a strange combination of politics and religion.

So how can be the visits to Yasukuni be purely religious? If the visits were just religious events, they would not make sense either. Why do the prime minister and politicians make official visits to a certain religious institute? In America, officials have begun to use “Happy holidays” instead of “Merry Christmas” to respect other religious holidays of that season. So, if Yasukuni were just a religious institute, would it be right for the prime minister to officially visit it?

I think it is ordinary Japanese people, first of all, who should get angry about politicians’ visits to Yasukuni.

What should Koreans and the Chinese do about this?

We should tell, not Abe and Japanese politicians, but the Japanese public, especially young people, and the rest of the world of these things.

And we should talk about the sex slaves and other people that fell victim in the Pacific War by the militarist Japanese government - not only Koreans and Chinese but also the Japanese - through cultural ways. You know, Anne Frank’s diary has a thousand times more power and influence on people than war records.

Let’s talk about your new book “The Vita Capitalism.” It criticizes the present state of financial capitalism and market-oriented ideas. Would you explain your alternative idea of the vita capitalism theory?

Today, we cannot imagine a world without markets. But in the old days in Korea, farm villages had almost self-sufficient economies. Markets for exchanges were not always open. They opened and closed on every fifth day or seventh day.

The 2008 global financial crisis, triggered by the collapse of the American financial company Lehman Brothers, incapacitated the existing economics, whose theories were set up on industrial capitalism.

In this era of finance capitalism, the gap between real and financial economies has widened too much and the problems exploded in the 2008 crisis. How many of us understand the complicated financial derivatives developed by so-called financial engineering?

The current global economy has swollen too much due to finances and become subordinated to finance. If you work hard and put your income in a bank, and if the bank goes bankrupt, your money is just gone.

But I am not talking about a reactionaryism that argues for eliminating finances and the current market system. I do not propose that we should go back to the Middle Ages. But we can freshly see the current world from some viewpoints from the Middle Ages that we have forgotten and adjust the current system.

I have to say that vita capitalism is not a complete theory. You know that I am not an economist. So I am ready to be criticized by economists.

Still I think my book can be a good start for alternatives to the current economic system, which has reached its limits.