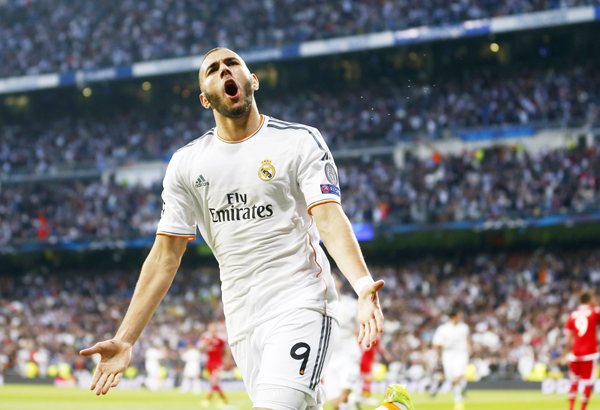 Karim Benzema’s goal gave Real Madrid a 1-0 first-leg victory over title holder Bayern Munich on Wednesday, but the nine-time champions may live to regret the missed chances in the first leg of their Champions League semifinal.

Madrid endured plenty of pressure in the first leg match but scored from a 19th-minute counter-attack. Cristiano Ronaldo found Fabio Coentrao speeding down the left flank and Benzema steered his low cross past goalkeeper Manuel Neuer.

Ronaldo returned from a left leg injury but missed a number of scoring opportunities before eventually giving way to Gareth Bale.

Bayern pressed for an equalizer in the closing stages, forcing Madrid goalkeeper Iker Casillas to deny Mario Gotze in the 84th minute while fellow substitute Thomas Muller had no better luck with his late effort from inside the area.

But Madrid should have extended its lead ahead of Tuesday’s return leg in Germany, as the team bids to end a three-season semifinal losing streak and reach the final for the first time since winning in 2002.

“If you want to do damage, you have to go for the victory because 1-0 is not definitive,’’ Madrid defender Sergio Ramos said as he looked ahead to a tough second leg match. “But it’s a good result to take to Munich.’’

Atletico Madrid or Chelsea await in the May 24 final in Lisbon, with the pair playing to a scoreless draw in their first-leg match on Tuesday.

Pep Guardiola endured his first loss at the Bernabeu as coach after seven previous visits with Barcelona, and at times the encounter took on the appearance of a “clasico’’ with Madrid looking to capitalize on the break while the visitors controlled play.

“Madrid thrives off the counter attack, Madrid is the best team in the world on the counter,’’ Guardiola said. “They get back as fast as they go forward; they’re athletes.’’

Madrid’s defense did well to contain Bayern in its area and then break quickly, but the Spanish club squandered its other chances after Benzema broke the deadlock.

Ronaldo, who looked uncomfortable at times despite passing a late fitness test, followed up a sharp header at Neuer with a first-time shot from Luka Modric’s perfect pass in the 26th minute - only for his effort to fly over the top with just the keeper to beat.

Madrid dug in and did well to clear many of Bayern’s best opportunities as it controlled three-quarters of possession in the first half. The German champions found space between the lines and combined some swift passing movements, with Franck Ribery picking out Arjen Robben inside the area in the 39th.

But Madrid weathered each buildup before surging forward, with Angel di Maria gathering a loose ball at the right post only to wildly shoot over Neuer before halftime.

After the break, Neuer had to dive low to keep out Ronaldo’s angled shot. Ronaldo forced Neuer into another low save before giving way to Bale, who energized Madrid’s attack with his pace. The Welshman was playing for the first time since his stunning winner in Madrid’s 2-1 victory over Barcelona in the Copa del Rey final.

“It’s been 20 days Cristiano hasn’t been 100 percent, so it was a sacrifice for him. It couldn’t have been easy for Cristiano tonight,’’ said Ancelotti.