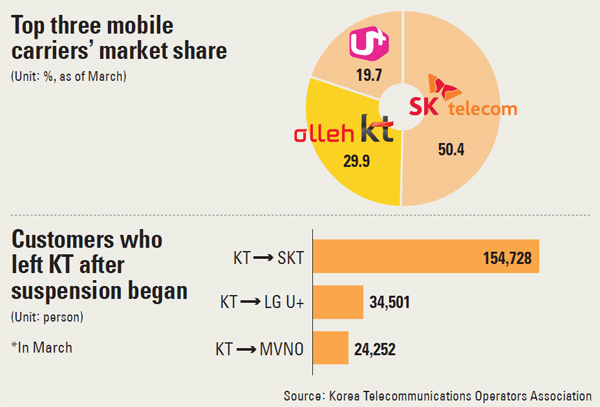 The nation’s second-largest mobile carrier, KT, will resume operations on Sunday for the first time since March 13, while LG U+ and SK Telecom will begin the second part of their suspensions.

According to the Ministry of Science, ICT and Future Planning, KT had 30 percent of the market in February before its suspension, compared to SK Telecom’s 50.1 percent and LG U+’s 19.9 percent.

An influx of consumers from KT and LG U+ to SK Telecom was further inflated by the release of Samsung’s Galaxy S5 at the end of March.

In an effort to reclaim customers, KT announced yesterday an unusual plan to poach customers from the two suspended carriers while keeping existing subscribers.

The company’s plan is to waive remaining monthly payments on a contract for customers who do not want to switch to a new phone because of the payments they must still make on their current contract.

Analysts said the plan could work to KT’s advantage because handset manufacturers are scheduled to release premium smartphones such as Pantech’s Vega Iron 2 and Sony’s Xperia Z2 in May when SK Telecom and LG U+ will still be suspended from operating until the middle of the month.

With new phones hitting the market, KT’s policy may keep the company from losing any more customers and could encourage customers to switch carriers in order to get a discount on a new device, which is usually smaller than the benefit of the policy.

However, KT’s plan is only alluring to those who initially subscribed to a costly monthly package.

In order to be eligible for the benefits, a customer is required to have been subscribed to his or her current plan for at least a year, meaning the customer would have already paid more than half the price of the phone.

The customer also would have paid cumulative monthly usage fees worth at least 700,000 won ($673). To meet the one-year condition, a user has to be subscribed to a monthly plan in which they pay at least 77,000 won.

KT will continue operating through the remainder of the suspension period, which ends on May 19.