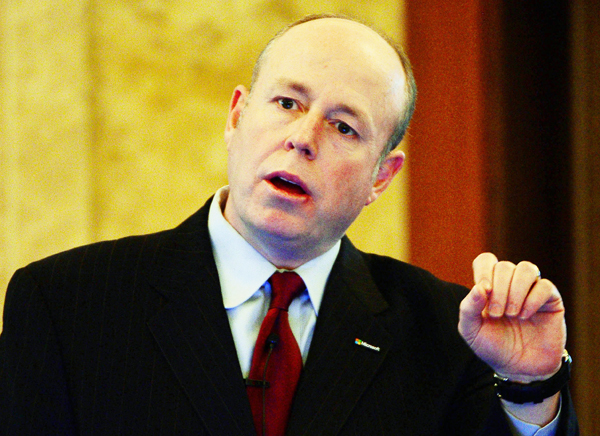 The Korean government needs to agree on a goal for its creative economy initiative in order for it to succeed, said Kevin Turner, Microsoft’s Chief Operating Officer.

Responding to a question after making a speech in Seoul yesterday, Turner said defining success helps realize a goal.

Turner said he once asked Microsoft’s top directors to write down the company’s three priorities and was surprised to find out that many came up with different answers.

The ambiguity surrounding the “creative economy” initiative was amplified last year by the slow pace of economic recovery, which distracted the Park administration from what it is calling its signature policy.

The initiative is rooted in qualities that Korea lacks, such as developing small and midsize enterprises, streamlining state regulations, and innovation in a predominantly homogenous society.

But the government has not drawn a clear picture of what it wants to create from the puzzle pieces.

In the meantime, the government is churning out new methods to fulfill its creative economy, including prioritizing science and engineering education.

Turner agreed that a focus on education is an important tool if Korea wants to foster more innovative start-ups.

“I think it starts first and foremost with the education system,” he said. “The ability to have people excited about math and science is important.”

He said it is already a proven tactic in the United States, where many math, science and engineering talents from overseas contribute to the creative culture.

Turner was lecturing on “Microsoft’s Commitment to Entrepreneurship, Innovation and Creative Economy,” an event that was organized by the American Chamber of Commerce in Korea, currently led by Microsoft Korea CEO James Kim.

He also mentioned Microsoft’s recently appointed CEO Satya Nadella, saying it is a good change for the company. Nadella is the third CEO at the 39-year-old tech giant. “Renewal is something that most people can get energized and excited about,” Turner said.