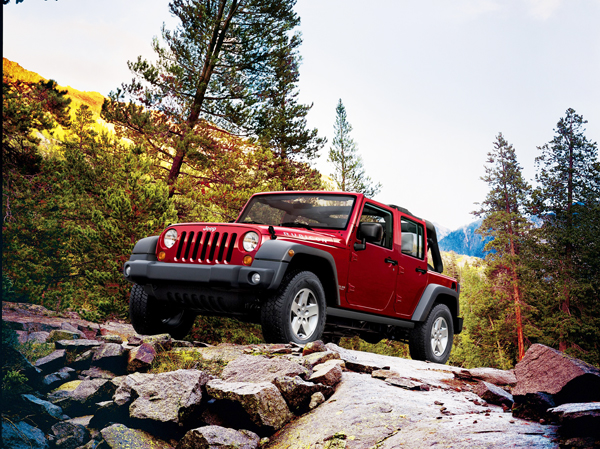 The Jeep Wrangler Unlimited Rubicon.Provided by the company

The Wrangler Unlimited Rubicon, which is currently available in Korea, is a representative model among Jeep autos. Like most vehicles from the Jeep brand, the Wrangler is an authentic off-road car that has the capability to navigate tough roads.

In addition to the car’s powerful and stable performance both on and off the road, undeterred by weather and landform, Wrangler offers comfort and protection to drivers and passengers.

The Wrangler’s functions for safer driving include automatic lights, a controller device for downhill driving, and ParkView, a rear camera to help with parking that is particularly beneficial when navigating off-road.

A 2.8-liter common-rail diesel injection engine with maximum 200 horsepower and 46.9 kilogram-meter (339 pound-feet) torque is loaded onto the car, and its fuel efficiency is 9.2 kilometers per liter (25.99 miles per gallon).

The Wrangler’s body is also designed to endure tough off-road environments, while the auto’s Rock-Trac 4WD system offers a 4:1 gear ratio that is even suitable for slow driving on rock-filled roads.

The fuel tank, transfer case and oil pan for the transmission are made of steel; one of the sturdiest materials used in cars, and has a specially reinforced under-skid plate to protect the lower body even when cruising on rocks.

The Wrangler’s removable hardtop, rectangular body, circular head lamp and the seven-slot grille is typical of Jeep models. However, the Wrangler adds a little twist to its appearance with new colors, such as yellow, red and orange, to suit the taste of drivers searching for unique design.

UConnect, the Wrangler’s multimedia system, has a 6.5-inch built-in LCD monitor, plays CD, DVD and MP3s and serves as a navigation tool. The hands-free system has voice recognition to allow safe driving and easy control. The 40 gigabyte built-in hard drive has space for 6,700 songs.

The SUV has grabbed the attention of car lovers. In 2010, readers of Edmunds.com, an online magazine for auto information, selected Wrangler as their Most Wanted Car, while Four Wheeler magazine chose the vehicle as the best 4x4 of the decade. And in the 2011 Specialty Equipment Market Association show, the world’s biggest automobile parts exhibition, Wrangler was selected as the hottest four-wheel drive SUV.

The Wrangler has inherited the strength of the Willys MB, the first ever Jeep, which was created in 1941 for military use during World War II. The power and speed of the four-wheel movement was recognized by the public after the war and has reinforced Jeep’s reputation as one of the longest-running automakers in the United States.

There are two major theories on where the name “Jeep” came from. One tale is that it came from what soldiers used to call the car, “GP,” an acronym of “general purpose.” Another argues that it came from the character Eugene the Jeep in Popeye, a popular cartoon at the time.

Wherever the name came from, it has become a byword for four-wheel drive vehicles.

“We plan to introduce the midsize SUV all new Cherokee to Korean customers later this year,” said an official from Chrysler, which merged with Jeep in 1987.